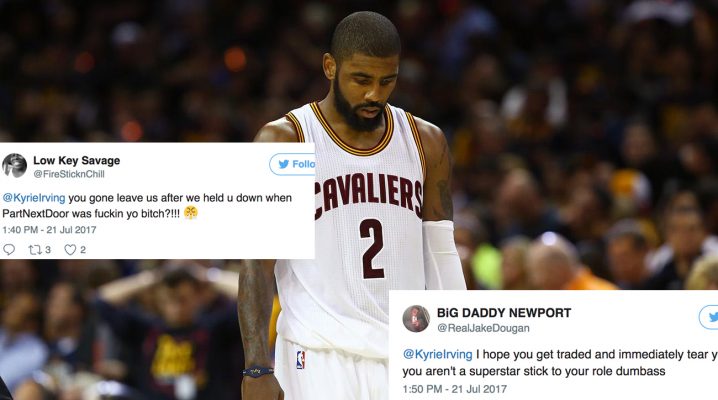 A Cleveland fan scorned can be rough, especially when it comes to social media, a fact that Cleveland Cavaliers point guard Kyrie Irving is discovering after news of his request to be traded became public on Friday afternoon. What’s happened since has been a blistering array of abuse via Twitter, with fans angered by the fact that Irving no longer wants to team with LeBron James in helping the Cavaliers battle for an NBA title.

It was just 13 months ago that Irving entered the Cleveland sports history books by hitting the winning shot in Game 7 of the NBA Finals. However, the absolute joy felt after that moment has been replaced by these examples of absolute rage:

Fuck you punk trader..you a sell out

@KyrieIrving noone, especially the Cavs GM gives a fuck about your "preferred landing spots." You a bitch forreal.

Kyrie if you get traded, I hope they send your bitch ass to the Nets. I mean that's what you would deserve, hope you like 21 wins bitch.

@KyrieIrving Ima Beat Yo ass if u leave Cleveland , Bitch

You're a bitch if you leave the Cavs @KyrieIrving You won't win shit with you being the main focal point, I want to punch you in the dick rn

@KyrieIrving you gone leave us after we held u down when PartNextDoor was fuckin yo bitch?!!! ?

You a bitch bro @KyrieIrving can't believe we compared you to Kobe.