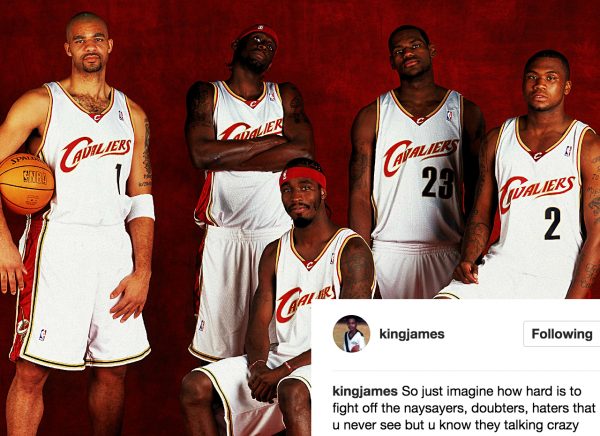 The highly anticipated 2017 NBA Draft concluded on Thursday night with the Cleveland Cavaliers not landing a single pick as expected.

It was rumored that the Cavs were trying to trade for California forward Ivan Rabb, but the deal fell through as Rabb fell to the Memphis Grizzlies with the 35th pick in the draft.

Meanwhile, superstar LeBron James, who was selected No. 1 in the 2003 NBA Draft, went back in time as he posted a video to his Instagram, which featured former Cavaliers Carlos Boozer, Ricky Davis, Smush Parker, and Darius Miles.

All four players spoke on James potentially coming to the Cavs in 2003, and all four seemed to think that James’ impact wouldn’t be as big as it actually was.

So just imagine how hard is to fight off the naysayers, doubters, haters that u never see but u know they talking crazy behind tv screens, computers, phones, tablets. Then imagine fighting off naysayers, doubters, haters that u would think have your back and u see them everyday! Keep the grass cut, so u can see em when they coming. Then u heat they ass up. Cause they cats that u went to play with, will catch you in your new whip and your brains into cool-whip(Kiss said it best)! So basically no matter what u do just keep the blinders on at all times, work hard, push forward and I promise you'll have the last ??????????????????? #StriveforGreatness? #RWTW?

“We have better players than him in his position already on our team though,” Boozer said in the interview.

“And he’ll come in and make an immediate impact like a Caron Butler,” added Parker.

And yet, the most naive comments seemed to come courtesy of forward Miles.

“I don’t think you can really just bring a high school player in and really just think your team gonna really turn around like that,” said Miles. “If he come, he can just hop on our bandwagon.”

In that same year, James carried the Cavs to a 35-47 record after the team went just 17-65 the year before. As a rookie he put averages of 20.9 points, 5.5 rebounds, and 5.9 assists per game and not only shut the players on his team up, but a lot of the critics on the outside as well.