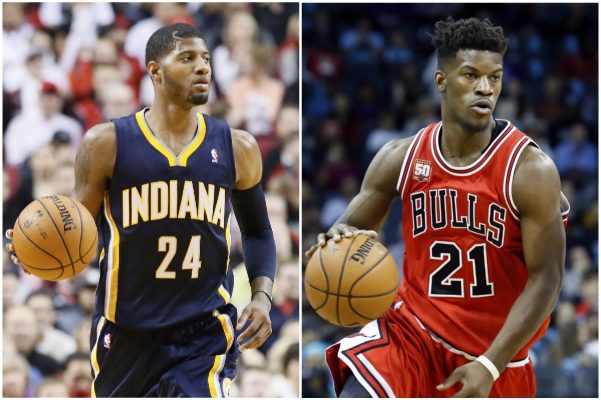 As of now, both trades seem in doubt, with George setting his aim for his hometown Los Angeles Lakers, and Butler being allegedly told to stay away.

Front office peculiarities and trade scenarios placed aside, there should be a discussion on who’d actually fit the Cavs roster best – George or Butler. It would be ultimate victory if the Cavs could acquire either of the two, without losing the services of Kevin Love. However, for this practice, let’s assume the high probability that Love will be sent away.

Their normal box score stat lines are fairly even and comparing two true two-way stars in George and Butler during the recent regular season is a hairsplitting process, though Butler won out with higher win shares (+6.7, per Basketball Reference). George has historically been the better postseason performer, which has been built upon his matchups with LeBron James. In an absolute vacuum, Butler is probably the better player because of his ability to defend point guards.

That’s where we should start in finding the better fit. The Cavs wouldn’t only require Butler’s 23.9 points, given Love’s hypothetical departure, they need his hard-nosed defense even more so. Averaging 1.9 steals, plus picking up less than two fouls a game, Butler’s shown consistent ability in guarding elite perimeter players without fouling. Forecasting his entry into the starting lineup – James, Butler, center Tristan Thompson, guard Kyrie Irving, and a shooter – the Cavs are improved and willing to give up interior rebounding for the ability to run and stretch defenses.

A lineup with the Pacers star looks equally appealing: James, George, Irving, Thompson, a shooter. The six-foot-nine George was opposed to playing the four in the Pacers’ updated system, but that would change in playing with James, who likely would be willing to adapt for the team.

With the lack of dominant one-on-one bigs in today’s game, a James-George tandem would give every frontline the blues on both ends and on a nightly basis. Favorable matchups would allow the Cavs to consistently place even elite bigs, like New Orleans Pelicans forward Anthony Davis, in no man’s land.

More specifically, in a matchup with the Golden State Warriors, having George helps nullify forward Draymond Green’s skill set, because he’d be forced to guard either George or James all series long. Not a great one-on-one scorer, Green’s typically feasted against players he’s more athletic, or frankly, more intelligent than.

Even as one of the NBA’s premier all-around defenders, Green would have serious problems with either on a prolonged basis. George also gives the Cavs a top-end player with great positional size to throw at Finals MVP forward Kevin Durant and even guard Klay Thompson.

In the end, mentality may be the distinguishing factor. The confident Butler has been subject to rumors of selfishness, and a questionable attitude. Plentiful enough to be a concern, would he be willing to step back and defer to Irving in specific situations? Would he attempt to undercut the current player leadership structure if the team runs through a tough stretch?

George, on the other hand, a couple off-court hiccups aside, has had no such issues. Like James, he’s typically going to make the best play for the team.

The fact is that the Cavs would get to the Finals again with either player, even with an improved Eastern Conference. Both are upgrades over Love, whose defensive woes couldn’t be hidden last season. In the end, though, it’s about how they matchup with the Warriors and the San Antonio Spurs to a lesser extent. The choice is clearly George, and his preferable size-to-skill ratio.

George already has a strong relationship with James. The forward would mesh well with James’ ability to get him much easier shots, especially at the rim. James also wouldn’t be forced to play down low on either end, a virtual lock to happen if or when Love departs.