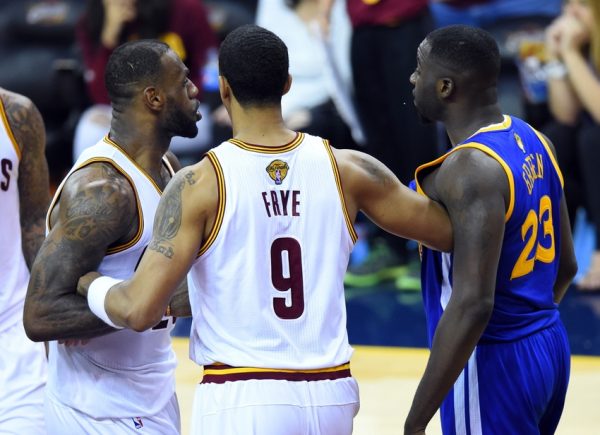 With the mouth of Golden State Warriors forward Draymond Green seemingly always in motion, it was inevitable that his constant stream of remarks was going to end up aggravating someone. That person appears to be Cleveland Cavaliers veteran Channing Frye, who made his comments known on Thursday.

Appearing on the “Road Trippin'” podcast he co-hosts with teammate Richard Jefferson, Frye spoke about his frustration at not being able to fully unleash his trash-talking skills on Green:

“If I would have scored eight to 12 points total, I’d be talking the most s—,” Frye said. “Dude, let me. I would have Wikipedia’d this life, dawg. I would have had the internet killing him all over the place. I was like, I wish he would have put me in. Oh, [Tyronn Lue], put me in for this reason alone. I’m ready, dawg. Listen. But I can’t say s—. I can’t say nothing. This f—ing sucks.”

The reason is that Frye only saw limited action in one contest, scoring two points and grabbing three rebounds. Green averaged 11.0 points, 10.2 rebounds and 4.8 assists in the five-game series.

However, Frye spoke about Green’s comments at the Warriors’ championship parade on Thursday, which took jabs at Frye’s teammate LeBron James:

“The other guy is such a great guy, and it’s like gentleman banter back and forth,” Frye said about Green, without actually mentioning his name. “It’s like, this is the greatest day you could have arguably in your life and you’re talking to us. That’s cool, though.”

During that discussion about Green, Frye did manage some humor when Jefferson began to speak:

“The one thing I will say …” Jefferson said.

“Is that he’s ugly?” Frye interjected. “Edit that, please.”

The Cavaliers players got together for the final time this season with a team dinner, with next year’s roster inevitably having a different look over the next few months.