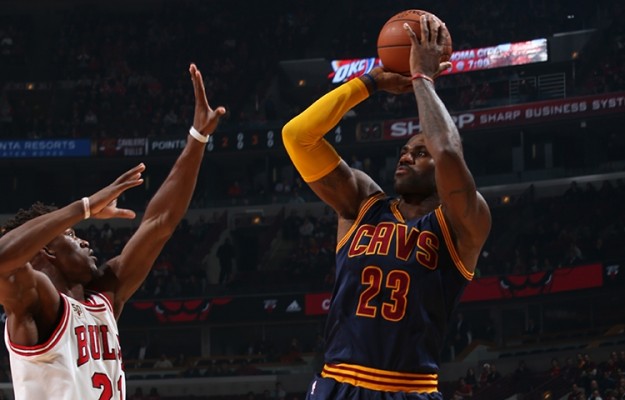 (Chicago, IL) – Despite a near-miraculous comeback in the final 62 seconds, the Cleveland Cavaliers dropped their season opener, 97-95, to the Chicago Bulls on Tuesday night at the United Center.

Kevin Love hit consecutive threes to chop what had been an eight-point deficit down to a single basket with 32.9 seconds left. After a Derrick Rose jumper missed with 10 seconds left, the Cavaliers immediately called a timeout.

LeBron James then drove to the basket, but his shot was blocked by the Bulls’ Pau Gasol with 3.6 seconds remaining. The Cavs were then unable to get off a final shot after Chicago’s Jimmy Butler slapped the ball away on the inbounds pass, allowing time to expire.

“We practice those late-game situations,” said Butler in postgame comments. “Everyone knows who’s going to get the ball. I just happened to be in the right place at the right time.”

In attendance was President Barack Obama, who watched a game in which the Cavs continued to battle back, only to come up short in the end.

James paced the Cavaliers with a double-double, connecting for 25 points and grabbing 10 rebounds, while also adding five assists. Mo Williams added 19, while Love contributed 18 on the night. Prior to those two threes in the fourth quarter, Love battled through a rough shooting night in his first official game back since his season-ending shoulder injury, hitting on just four of 15 attempts.

In addition, his first time in game action after holding out for the entire preseason, Tristan Thompson managed just two points, but once again excelled on the boards with 12 rebounds in just under 25 minutes of action.

Despite the loss, David Blatt was upbeat after the game about the Cavs’ performance.

“It hurts a little bit, but there were a lot of positives,” said Blatt. “It was a one-shot game.”

Cleveland showed good ball movement throughout the game, dishing out 26 assists and scoring 42 points in the paint, but was plagued by ice-cold shooting for much of the first half. The Cavs shot 60 percent from the field during the first three minutes and final four minutes of that first half. The problems was that in between, they managed to connect on just seven of 35 attempts for just a 20 percent effort.

It was during that cold spell that the Bulls went on a 19-2 run, despite not shooting that well themselves. Twice holding leads of 11 points, the last time at 34-23, they showed a much more aggressive presence on the court in that first half, though the Cavs were able to cut the deficit down to six before heading to intermission.

Chicago took its biggest lead of the game at 61-48, but by the end of the third period, Cleveland had chopped the margin to just three points at 71-68. In what might be seen as a positive for the season ahead, a good portion of that push by the Cavs came with James resting on the sidelines.

A three by Williams to start the final quarter tied the game for the first time since a first quarter deadlock at 15, However, the Bulls ran off eight straight points to again take control of the game, and appeared to have put the game away until that late surge by the Cavaliers.

The Cavs have little time to lick the wounds of this first loss, with a road game against the Memphis Grizzlies on tap for Wednesday night. James talked about his health after the game, given his time off during the third quarter saw him lying on the court to protect his back.

“We’ve got  a quick turnaround,” said James. “It’s a test to see what I feel like tomorrow.”

Tip-off is set for just after 8 p.m. ET. The Cavs then return to Quicken Loans Arena on Friday night for their home opener against the Miami Heat.