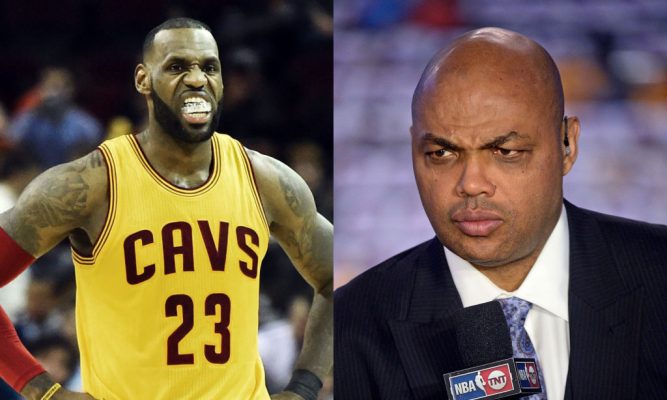 The animosity between Cleveland Cavaliers superstar LeBron James and NBA Hall of Famer Charles Barkley has surfaced periodically, usually due to remarks made by Barkley about James. The most recent instance of this comes as a result of James making his controversial remarks about the need for the Cavaliers to upgrade their roster, with Barkley’s comments causing James to offer a stinging rebuke.

“Inappropriate. Whiny. All of the above,” Barkley said in regards to James’ public cry for a playmaker. “The Cleveland Cavaliers, they have given him everything he wanted. They have the highest payroll in NBA history. He wanted J.R. Smith last summer, they paid him. He wanted Iman Shumpert last summer. They brought in Kyle Korver. He’s the best player in the world. Does he want all of the good players? He don’t want to compete? He is an amazing player. They’re the defending champs.”

An obviously aggravated James spoke to ESPN about Barkley’s comments after the Cavs’ 104-97 loss to the Dallas Mavericks on Monday night.

“He’s a hater,” James said. “What makes what he says credible? Because he’s on TV?”

Those jabs were only the beginning of James’ lethal takedown of Barkley.

“I’m not going to let him disrespect my legacy like that,” James continued. “I’m not the one who threw somebody through a window. I never spit on a kid. I never had unpaid debt in Las Vegas. I never said, ‘I’m not a role model.’ I never showed up to All-Star Weekend on Sunday because I was in Vegas all weekend partying.

“All I’ve done for my entire career is represent the NBA the right way. Fourteen years, never got in trouble. Respected the game. Print that. “

The origin of this feud began roughly around 2010, when James had announced that he would leave the Cavaliers to play for the Miami Heat. Barkley referred to it at the time as a, “punk move.”

Then, last summer, after James had led Cleveland to their first NBA title, Barkley commented that James would never rank among the five greatest players in league history. The five that Barkley deemed better were Kareem Abdul-Jabbar, Wilt Chamberlain, Michael Jordan, Oscar Robertson and Bill Russell.

James has also been criticized in the past by Barkley and others about being too friendly with opposing players, most notably with former teammate Dwyane Wade, Carmelo Anthony and Chris Paul. The hypocrisy of Barkley making such remarks wasn’t lost on James.

“Go watch the ’93 Finals when John Paxson hit the shot,” James said. “Barkley and Jordan were laughing and joking with each other during one of the games while somebody’s shooting a free throw. In the Finals. But, oh, nobody were friends back then.

“I know he wanted to retire a long time ago, but he can’t. He’s stuck up on that stage every week. And if this makes him want to talk to me, the schedule’s out there. He knows every road arena I’ll be in. Don’t just come up to me at All-Star and shake my hand and smile.”

James also defended himself against charges by Barkley saying that he’s making personnel decisions for the team.

“I collect one paycheck from this,” James said. “There’s the owner, Griff’s (David Griffin) the GM, I’m the player. Screw Charles Barkley.”

Just prior to leaving the locker room, James indicated that this outburst was a glimpse into the future.