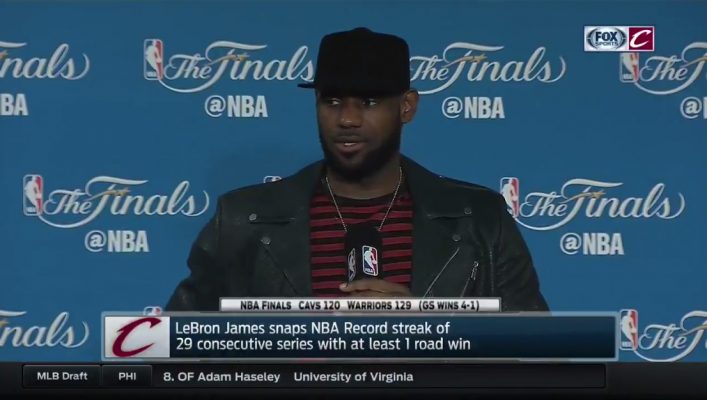 When Kevin Durant and the Golden State Warriors won the NBA title on Monday night, it marked the first time in Durant’s 10-year career that he’d been part of a championship team. After the Warriors’ Game 5 victory, Cleveland Cavaliers forward LeBron James was asked (for some reason) if he was happy that Durant had finally excised that professional demon from his legacy, the first of which led to an inevitable answer.

LeBron James keeping it real when asked if part of him is happy for Kevin Durant: "I'm not happy he won his first. I'm not happy at all."

LeBron James to Kevin Durant: "They are always going to have
to say that you're a champion…. They can never take that away from you."

Much like Durant did this year, James faced many of the same questions when he also made the controversial decision to leave his original team, the Cavs, in 2010. Two years later, his Miami Heat squad defeated Durant’s Oklahoma City Thunder, the first of two consecutive titles. That trip to the Finals had been Durant’s only other trip to the Finals, while James has made it to each of the last seven.

It remains to be seen if Durant and the Warriors repeat as champions next season, though oddsmakers have already established them as strong favorites. Both Golden State and Cleveland broke new ground this year by becoming the first NBA teams ever to meet in the Finals for three consecutive years. The Cavaliers are certainly hoping they get the opportunity to make it back again next year.