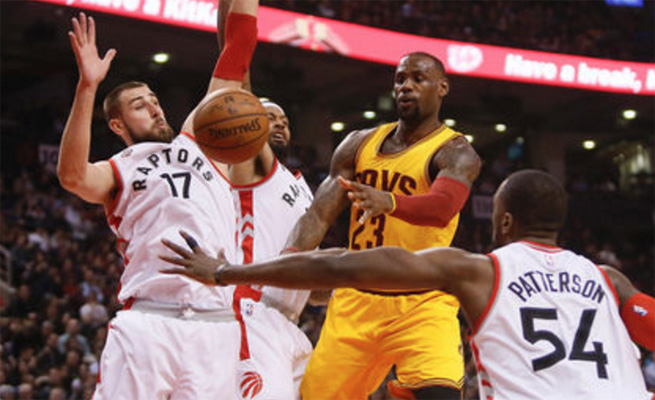 The Cleveland Cavaliers have come a long way from the team which was often forced to take shots late into the 24-second clock during last year’s NBA Finals and in several games this past season.

Now it’s the Toronto Raptors, their opponents in the upcoming Eastern Conference finals, who have found the extra pass to find the open man to be something of a scarce commodity.

As was pointed out Sunday by Joe Wolfond of The Score minutes after the Raptors eliminated the Miami Heat with a resounding 116-89 Game 7 victory, you had to go back 10 years to a Western Conference semifinals series between the Dallas Mavericks and the San Antonio Spurs to find the last time two teams combined for fewer assists on average than the Raptors and the Heat.

“The plodding, low-scoring, grind-it-out affair featured countless aimless offensive sets that devolved into late-clock desperation heaves. It went heavy on isolations and light on ball movement. And it ended with the two teams averaging fewer combined assists than any teams in any playoff series in the past decade.

Meanwhile, the Cavaliers have averaged 23.9 assists and only 10.9 turnovers a game in sweeping both the Detroit Pistons and the Atlanta Hawks. LeBron James, who accounted for more than half of the Cavs’ 95 assists in their six games against the Golden State Warriors last June, is handing out an average of 7.3 assists a game, up slightly from his regular-season figure of 6.8. Kyrie Irving, who missed the last five games against the Warriors with a knee injury but has been healthy this entire postseason, and Matthew Dellavedova have combined for 73 assists and a mere 16 turnovers.

If the Raptors are going to make things interesting in a series, where they are a sizable underdog, chances are they’ll have to make things ugly just like they did against the Heat. Game 1 is Tuesday night at Quicken Loans Arena.