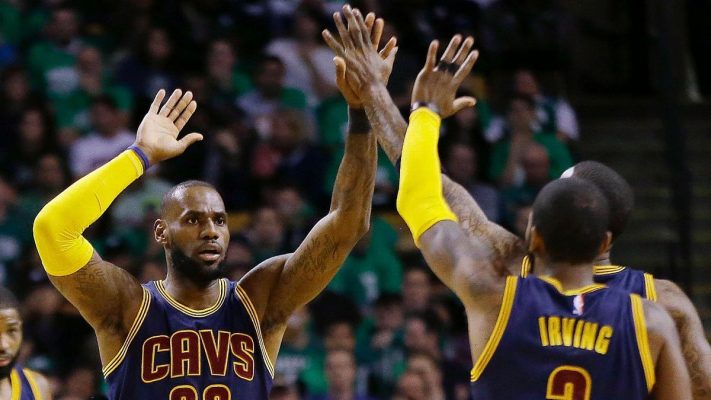 (Boston, MA) – Led by 59 points from the duo of LeBron James and Kyrie Irving, the Cleveland Cavaliers dominated play from beginning to end and clinched the Eastern Conference Finals with a resounding win over the Boston Celtics in Game 5 at TD Garden on Thursday night. The duo helped pound the final nail in the coffin by combining for 28 points during a third quarter that saw Cleveland outscore Boston, 34-17.

The win puts the Cavaliers in the NBA Finals against the Golden State Warriors, marking the first time in league history that the same two teams have played in the Finals for three consecutive years.

Despite his role in the victory, James took a broader approach when thinking about the win:

“I think the excitement for me was seeing the look on Kyle Korver and Deron Williams, guys that have been in the league for so long and never reached the Finals,” James said.

James led the way and once again etched his name in the record book by becoming the all-time leader in postseason points, passing Michael Jordan with a 35-point night that also saw him add eight rebounds, eight assists and three steals.

“I did it just being me. I don’t have to score to make an impact on the game and that approach has taken me this far,” James said about his historic achievement.

Irving tossed in 24 on the night and also managed to hand out seven assists, with 13 of those points coming in the third quarter.

“That’s what he (Irving) does, those are the shots he takes,” Cleveland head coach Tyronn Lue said about the third-quarter push. “We just need him to be aggressive all the time.”

Kevin Love managed another quiet double-double, collecting 15 points and 11 boards, while also making an impact on defense with four steals. Williams served as a key facet of the Cavs offense during the second quarter, scoring all 14 points in that period.

“It’s exciting. When I came here, I expected to be here, but we started rough and finished the regular season rough,” Williams said. “We’ve had some tough battles and games that tested us and those have helped us prepare.”

Lue also took the time to acknowledge the value that Williams brings to the squad:

“D. Will was great. He was just playing confident,” Lue said. “That’s what you get with a veteran like that.”

Right from the start, the Cavaliers came out ready to play. Love scored the Cavs’ first eight points and the team collected its first double-digit lead at 15-5 with just over four minutes gone in the game. That lead would twice reach 21 points during the opening quarter as the Cavaliers combined aggressive play with strong defense, the latter best exhibited by the Celtics missing 12-of-16 from the field to start the game. While they improved to 39 percent by the time the period had ended, the Cavs shot 64 percent in the same category and held a 43-27 lead at quarter’s end.

“We just came in here with a mindset that we didn’t want to play any more games,” James said.

In the second period, Williams’ 14 points powered Cleveland, which took its biggest lead of the half at 59-36 with seven minutes left. During the course of the quarter, the Celtics began to display instances of frustration, most notably a technical foul assessed to Gerald Green. By the time halftime had arrived, the Cavs held a 75-57 lead and again kept up the heat on defense by forcing six turnovers.

Any inkling that the Celtics would salvage the game never materialized after the break as the Cavaliers continually pushed the lead up throughout the third quarter. By the time the period had ended, the Cavs held a 109-74 advantage, turning the final quarter into garbage time.

“It feels good to play some inspired basketball,” Love said. “More than anything, to win the East is special and we can’t take that for granted.”

After the game, Irving attempted to explain his continued steps forward as a player:

“I think I’m seeing the floor better than in my younger years,” Irving said. “Every chance I get to play the game allows me to get better.”

The 135 points marked the most points ever by the Cavaliers in a postseason game and they also established a new benchmark in NBA history, notching their 13th consecutive win in a close-out game.

“I definitely thought through this playoff run that our defense has been good,” Lue said. “This is a big step for us, especially with all the adversity we face during the year.”

Game 1 of the Finals will take place next Thursday night, June 1, against Golden State at Oracle Arena in Oakland. The game will be broadcast nationally on ABC, with tipoff set for just after 9 p.m. ET.

“We’re going to enjoy this for a few days before we lock in and prepare for that juggernaut out West,” James said.