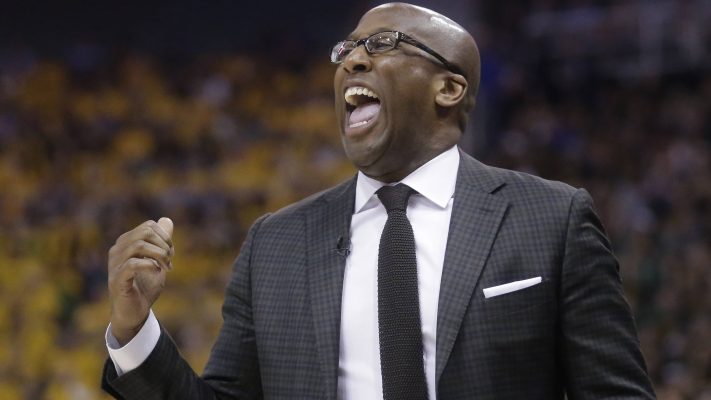 Just one day after Cleveland Cavaliers head coach Tyronn Lue took a jab at the offense of the Golden State Warriors, their interim head coach Mike Brown responded to the remark. Brown’s comment was succinct, yet gave off an air of irritation that will intensify the possible NBA Finals matchup between the two teams that would begin on June 1.

Mike Brown on Tyronn Lue saying Boston is tougher to guard than Golden State: "That's his opinion, it's cute."

On Wednesday, Lue had spoken about the difficulty of facing a Boston Celtics team that was without their standout point guard in Isaiah Thomas:

“The stuff they’re running, it’s harder to defend than Golden State’s (offense) for me, as far as the actions and all the running around and all the guys who are making all the plays, so it’s a totally different thing,” Lue said. “Like, they hit the post, Golden State runs splits and all that stuff but these guys are running all kinds of (stuff). And Brad’s (Stevens) got them moving and cutting and playing with pace and everybody is a threat.”

Brown’s involvement in the rivalry, which has come about because of the health issues plaguing Warriors head coach Steve Kerr, adds a unique dynamic to this potential matchup. That’s because he was head coach of the Cavaliers for a total of six seasons. During the first five from 2005-10, he coached LeBron James and helped the Cavs reach the Finals for the first time ever. In 2013, Brown returned to serve as head coach of the Cavaliers, but was dismissed after a single season. He eventually resurfaced in an assistant role with the Warriors.

Cleveland still needs one more win over Boston in order to face Golden State. If that happens, it will mark the first time ever in NBA history that the same two teams have battled each other in the Finals in three consecutive years. The fact that this would be the rubber match after each team has captured a championship heightens the level of attention.