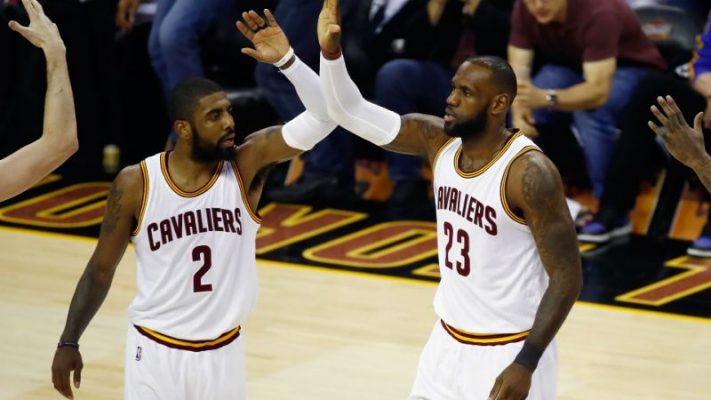 With neither LeBron James nor Kyrie Irving part of the Cleveland Cavaliers anymore, the relationship between the two superstars during their time with the team is being explored. While one theory is that the two players had a falling out that led to Irving asking to be traded, one team insider dispels that notion.

The Cavaliers’ former high-performance director Alex Moore spoke to Omnisport about how the two players got along during their three seasons together. He blames media speculation for fostering the idea that the severing of the connection between James and Irving was because of a disintegration in their relationship:

“There was no falling out. I think that’s more media talk. The locker room was totally fine. [Irving] just wanted to go in another direction.”

During those three seasons as teammates, the two players were integral to helping the Cavaliers reach the NBA Finals each season. In 2016, each played a central role in helping the Cavs capture the franchise’s first-ever NBA title. Irving connected on a dramatic 3-pointer in the final minute of Game 7 and James was awarded the Finals MVP for a remarkable performance that helped the Cavaliers bounce back from a 3-1 deficit.

Moore specifically says that James helped change the culture of a Cavs team that had endured four straight losing seasons before he returned:

“When he came back, the entire place changed. The emphasis went on winning a championship.”

James’ inspirational qualities were cited by Moore as one reason for the team’s resurgence:

“He’s so professional and he’s such an unbelievable athlete that, when he came back, everybody was just driven. There was this feeling that, ‘We have to win this, we’re going to do everything we can.'”

Leading by example was a key facet of James’ approach, according Moore:

“The way he displays, on and off the court, is such a great example that everyone else falls in line with what he’s doing.”

With the 2018-19 NBA regular season set to get underway, the Cavaliers have embarked on a rebuilding project that officially begins on Wednesday night in Toronto. For James and Irving, they’ll have two opportunities to play against each other with their new respective teams, the Los Angeles Lakers and Boston Celtics. The first meeting between these two teams takes place in TD Garden on Feb. 7, followed by the rematch at the Staples Center in Los Angeles on March 9.