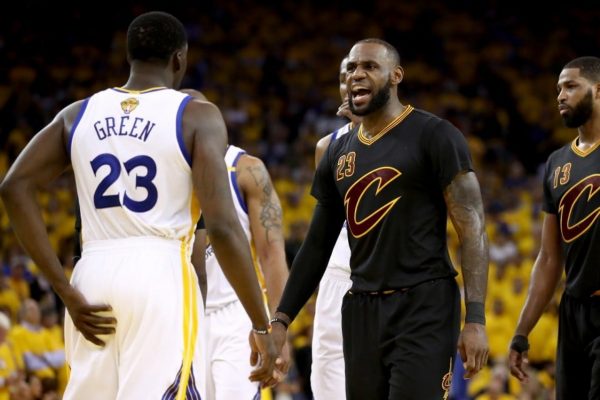 In the four years that the Cleveland Cavaliers and Golden State Warriors have met in the NBA Finals, Warriors forward Draymond Green has been an annoying thorn in the Cavaliers’ side. Green is continuing that tradition in the buildup to Sunday night’s Game 2 by taking a shot at the Game 1 fashion choice of the Cavs’ LeBron James.

Looks like Draymond got the suit shorts memo. pic.twitter.com/ZSJQHyMasb

After James wore his shorts outfit, he endured some ribbing from media and those on social media. Green’s opinions won’t likely merit much of a response from James, who’s more focused on trying to even the series at one game apiece, though the two players have some controversial Finals history between them. Two years ago, it was James’ provocation of stepping over Green that led to a one-game suspension of the Warriors forward. That subsequently sparked the Cavaliers to three consecutive wins and their first-ever NBA title.

More recently, Green was in the center of another controversy at the end of Game 1, when his mocking of ejected Cavaliers center Tristan Thompson nearly sparked an on-court brawl. Thompson was fined for his actions, avoiding a suspension in the process, and saw his flagrant-2 foul downgraded by the league. The latter action was likely related to Green’s long history of provocations.