Video: Visibly Frustrated LeBron James Snaps at Reporter, Who Claps Back via Twitter 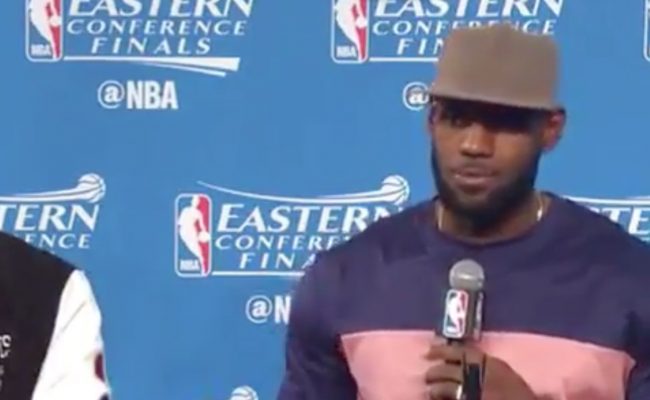 The combined frustration of having a rare off night and watching his team blow a 21-point lead resulted in Cleveland Cavaliers forward LeBron James snapping at a reporter for trying to dig deeper into the cause of his struggles on the court.

The exchange between James and radio personality Kenny Roda came during Sunday night’s postgame press conference. James, who finished with just 11 points, six rebounds and six assists in the 111-108 loss, began by saying:

“I had a tough game, period. I didn’t have it. They doubled me a little bit more in the post. My performance personally was all on me,” James said.

That led to a follow-up question from Roda:

"You always come around when we lose, I swear." ?

The last time that James scored less than 15 points in a playoff game came as a member of the Miami Heat. On May 28, 2014, he scored just seven points in Game 5 of the Eastern Conference Finals as the Indiana Pacers defeated the Heat, 93-90. However, two nights later, James countered with 25 points in 32 minutes as part of a 117-92 Miami victory.

The Cavaliers and Celtics will play Game 4 on Tuesday night at Quicken Loans Arena, with tipoff set for just after 8:30 ET. A win will put the Cavs in position to clinch the series in Boston on Thursday night.