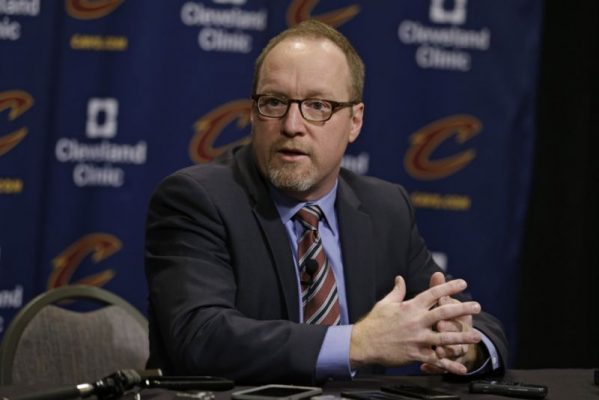 The drama provided by the Cleveland Cavaliers is beginning to be matched off the court by the Cavs front office. That’s because of the uncertain status of the team’s general manager, David Griffin, whose contract is up at the conclusion of the season.

Adrian Wojnarowski of The Vertical and Yahoo! Sports reports that a request by the Orlando Magic to speak with Griffin received no response from Cavaliers owner Dan Gilbert. Since Gilbert’s permission is needed, the Magic will have to wait until Cleveland’s season comes to an end, something that may not occur for another month.

Griffin is under contract until July 1 and may not be able to speak with other teams with job openings until after the June 22 NBA draft. The Magic and Atlanta Hawks have shown interest in Griffin, but they likely want a new man running their team prior to that time. Still, the risk of losing Griffin remains high, according to Wojnarowski:

“There’s been a consistent belief inside and outside the Cavaliers’ organization that Griffin will aggressively pursue the Magic’s president job because of Cleveland’s unwillingness to offer him a market-level contract. Through the years, most in the employ of Gilbert believe that he has increasingly devalued the position of GM in his mind, believing that he can replace Griffin the way he did Chris Grant and Danny Ferry within the Cavaliers: promoting from within and paying less salary.”

Hired in September 2010 as the team’s vice president of basketball operations, Griffin took over the general manager’s role in 2014 following the departure of Grant. He’s currently making approximately $6 million per year and has been the main architect in constructing a team that’s playing in its third consecutive conference finals, winning its first NBA title last season. The highest paid executives within the league are believed to be making as much as $11 million per season, but according to Wojnarowski, the Cavs haven’t made a substantive offer to Griffin.

The apparent negotiating strategy of Gilbert is likely a mystery to most observers, considering that he’s routinely gone over the salary cap in recent years to stock the Cavaliers’ roster. That’s led to steep luxury tax penalties, which wouldn’t be affected by an increase in Griffin’s pay. In addition, the team added a new source of revenue on Monday by signing a contract with Goodyear to have the company’s logo on the team’s jersey beginning next year. That move will add millions in each of the next three years to the team’s coffers.

More ominously for Gilbert is the fact that LeBron James has strongly endorsed the work of Griffin. Alienating his team’s top player as well as head coach Tyronn Lue, who’s also offered high praise for Griffin’s work, could lead to more headaches that will end up costing the franchise much more money than a simple increase in Griffin’s paycheck.