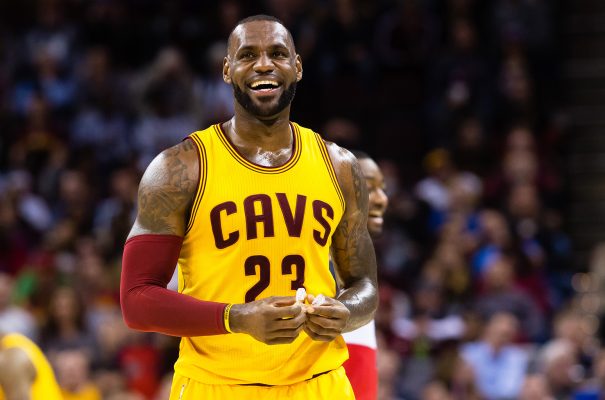 When the Cleveland Cavaliers take the court for the 2017-18 NBA season, their uniforms will be sporting a small new addition to it. That will be a logo of Goodyear, the tire company that was founded and still has its world headquarters in Akron, the hometown of Cavaliers star LeBron James.

Darren Rovell of ESPN reports that the news will be announced later on Monday, with the actual logo consisting of the company’s trademark wingfoot. It will be visible on the upper-left corner of the team’s jerseys, though it will only be a 2.5-inch-by-2.5-inch space.

The idea for NBA teams to have corporate logos was first announced in April 2016, with the league becoming the first major professional North American sports league to allow it.

While the amount of money the Cavaliers will be receiving each year wasn’t announced, Rovell noted the potential value:

“The logo being in clear view on television while the Cavaliers play will be worth $7 to $10 million a year, estimates Eric Smallwood of Apex Marketing Group, a sponsorship evaluation firm. Adding video games, trading cards and social media, the advertising value could approach $30 million annually, Smallwood said.”

Goodyear has had a long connection with sports, with its blimp a ubiquitous presence at countless sporting events. The company currently sponsors the College Football Playoff and the Pro Football Hall of Fame in nearby Canton and the annual Cotton Bowl game.

The company’s connection to professional basketball actually began 80 years ago with the formation of the National Basketball League (NBL). By 1949, some of the remaining teams within the NBL became part of the early NBA.

The Cavs would be at least the sixth NBA team to have a sponsorship agreement in place, with the Boston Celtics having the most prominent company among those other teams: GE.