Report: Cavs to Remove Essential Part of Practice Due to Fear of Injuries 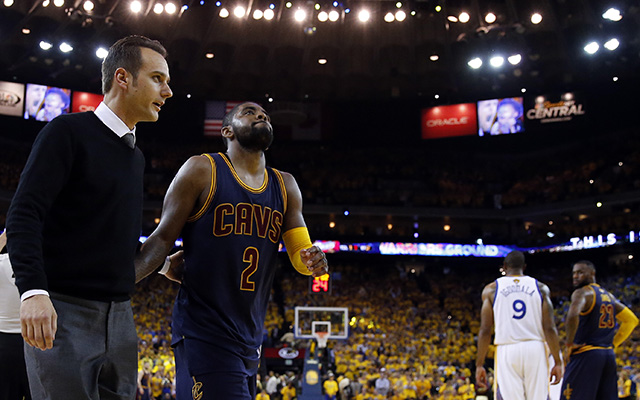 As members of the Cleveland Cavaliers are itching to play after what is to be a nine-day layoff since their Game 4 against the Toronto Raptors, head coach Tyronn Lue isn’t making things easier on his players with a decision he reaffirmed on Saturday.

After reserve center Edy Tavares had suffered a fracture in his right hand during a scrimmage on Thursday, Lue says he has no intention of letting his players scrimmage during his team’s extended layoff.

Star point guard Kyrie Irving commented on the situation, saying that he wishes Lue would let the team scrimmage, but understands why the coach is holding them back:

“Absolutely I wish he would, but at the same time, I understand how important it is. An incident happened in practice where somebody got hit in the hand and it just wasn’t good,” Irving said. “I was about to come out and play five-on-five and the incident happened three seconds later as T-Lue comes out of the door. Naw, I’m not for scrimmaging right now until the game.”

Lue admits that the team is “itching to play,” as he guides his players through walkthroughs and his team continues to go over plays:

“You gotta show them new things. I’ve got to trick them at times, but they’ve been pretty locked in,” Lue said.

Irving continued about the “itch” to just go out there and play in a real game after such a long layoff:

“When we say we’re going about 50 percent, some guys are going 75 and 80 and some guys are going 25 and 20,” Irving said. “When you have a mix like that and we’re not necessarily shooting the ball, we’re just running through plays, some guys get a little bit antsy and mad and they want to go to the basket and finish plays.

“Just get everything firing again because you miss the contact, you miss getting hit and being able to be there for your teammate and get hyped and go in transition. Just the little nuances that make this game so beautiful and competitive and you love it. When you’re not playing it, you try to do anything to keep you sharp.”