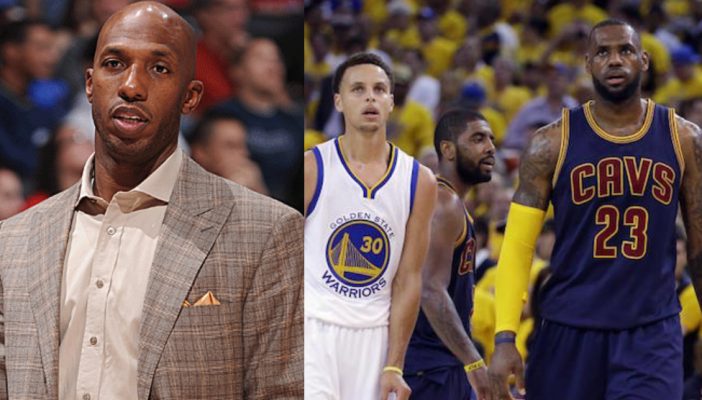 The Cleveland Cavaliers stand just four wins away from reaching the NBA Finals for a third consecutive year. In the opinion of former NBA veteran Chauncey Billups, history will be repeating itself by the time the NBA Finals come to an end.

That’s because Billups is picking the Cavaliers and Golden State Warriors to face off against each other for a third consecutive year, with the Cavs ultimately hoisting the Larry O’Brien Trophy at the end. He also offered his vision of exactly how things will play out to Los Angeles Times reporter Paul Coro:

“I don’t see any challenges coming from any other teams,” Billups said. “At the end of the day, the Warriors and Cavs are just better. I think it’ll be a seven-game series. You always have to be a little bit lucky to win a championship. The Cavs were fortunate that Draymond [Green] didn’t play Game 5 and rode that momentum. The year before, the Warriors were fortunate that Kyrie Irving got hurt.

“I like Cleveland to win. They’ve got more shooters. They played a nine-man rotation in the last series and there’s only one guy who can’t make a three and that’s Tristan Thompson, but what he does is invaluable. LeBron [James] is still the best player in the world and now you’ve got guys around him knocking down shots.”

Of course both the Cavaliers and Warriors still need to get past their conference championship foes. The Cavaliers will face either the Boston Celtics or Washington Wizards in the East, while the Warriors will battle the San Antonio Spurs. Regardless of which teams advance in those series, the NBA Finals will get underway on June 1.