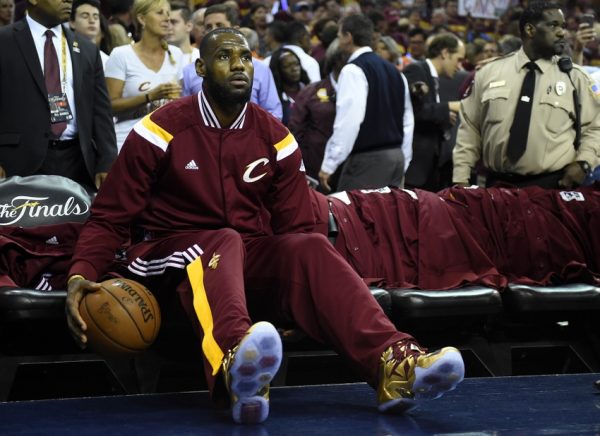 As the Cleveland Cavaliers progress in the postseason, some pundits have expressed concern about the amount of minutes that LeBron James has been playing. Their considered belief is that playing until mid-June will result in James’ energy level dropping to a point that proves fatal to the team’s hopes of repeating as NBA champions.

However, Cavs head coach Tyronn Lue dismisses such talk, despite the fact that the 32-year-old James led the NBA with 37.8 minutes per game during the regular season.

“I don’t understand why people make a big deal out of his minutes. He had a week off before the series started. We won four straight games and then he had a week off again. So next he might play 48 minutes,” Lue said. “He knows his body better than anyone. He said he feels great and he feels worse when he doesn’t play, so we’ll see how that works out.”

Lue believes that the heavy regular season workload has actually helped James get his body used to playing even more during the postseason. In addition, the lack of practice time the team has had over the course of the season has actually proven to be a benefit instead of detriment.

“With him playing the minutes he played during the course of the regular season, it has helped him in the playoffs,” Lue said. “Now he is able to play those 42, 43 minutes. Because he’s used to it. His body can take it, so, I’m not worried about what outside people say.

“Other teams are suffering because they listen to what the media is saying about guys playing minutes. Some teams should play some guys more minutes, and it would’ve been different (playoff) series.”

During the sweep of Indiana, James averaged 43.8 minutes per contest and served as the focal point of the team’s memorable comeback in Game 3. He came close to averaging a triple-double with 32.8 points, 9.8 rebounds and 9.0 assists per game. In addition, he connected on 54 percent of his field goals and hit 45 percent of his three-point attempts.

Yet despite being a constant presence on the court in each of the four victories, James actually trailed teammate Kyrie Irving when it came to handling the ball. That’s especially noteworthy considering that Irving sat out all of the fourth quarter during that Game 3 comeback.

“Uh, hmm. I know they say numbers don’t lie but man, um, I’m trying to think about the possessions that I actually had the ball in my hands,” Irving said. “But, nah, I don’t think it was maybe a subtle thing or anything like that. Man, Bron, had the ball for about four seconds some times and he was at the basket already.”

James and his teammates will get back to playing early next week against either the Toronto Raptors or Milwaukee Bucks, with Toronto currently holding a 3-2 advantage in the best-of-7 series. The first two games will take place at Quicken Loans Arena.