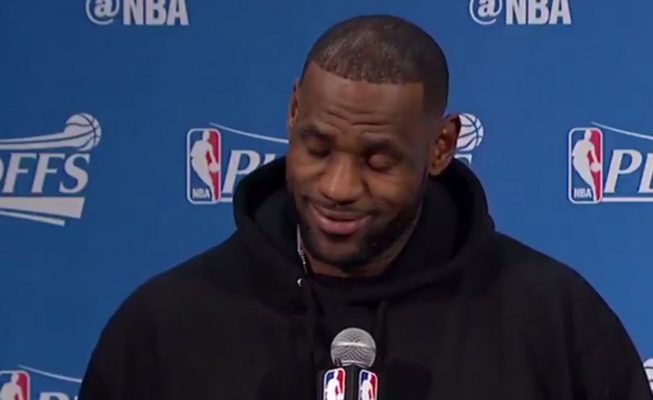 The Cleveland Cavaliers’ sweep of the Indiana Pacers on Sunday extended what’s become an incredible run for the Cavs’ LeBron James over the past six seasons. During that stretch, his teams have won 21 consecutive games during the first round, a mark so notable that during a postgame press conference after Game 4, James couldn’t remember at first when he had tasted defeat during the opening round.

Reporter: LeBron, do you remember the last time you lost a game in the first round?

After being asked the question, James chuckled and simply said, “No, I don’t,” before asking the reporter when the game was played. Noting that it took place in May 2012 against the New York Knicks, when James was playing for the Miami Heat, the reporter then added that one of the players on that Knicks team was James’ current teammate, J.R. Smith.

The hints jogged James’ memory about Game 4 of that series, which took place on May 6, 2012 and was won by the Knicks, 89-87, though the Heat clinched the series with a 106-94 victory in Miami three nights later. In that 2012 game, James’ close friend Carmelo Anthony scored 41 points and hit a 3-pointer with less than a minute left that gave the Knicks the lead for good. However, James had a different memory from that game about Smith:

“J.R. had a nice move in that game, by the way. I think he had a windmill dunk on the baseline,” James said before asking if the Heat had won the series in five games, which was confirmed.

The Cavaliers will now wait to see which team they’ll play in the Eastern Conference semifinals. The Toronto Raptors and Milwaukee Bucks are currently deadlocked at two games apiece in their best-of-seven series, with Game 5 set for Monday night at the Air Canada Centre.