LeBron James, Russell Westbrook and Several Others Have ‘Disdain’ for Stephen Curry 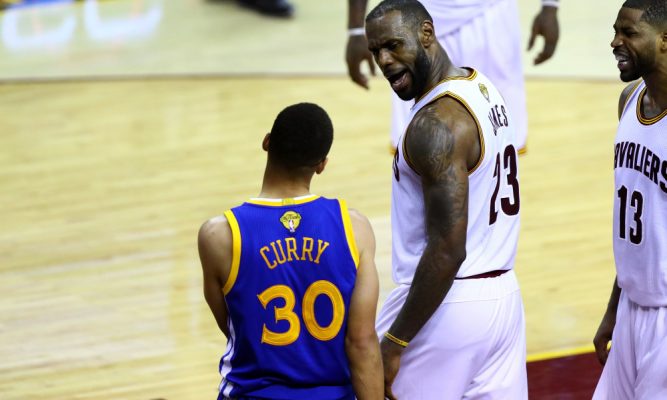 Over the past couple of seasons, Golden State Warriors dynamic point guard Stephen Curry has propelled himself into NBA stardom. The Baby Faced Assassin may look innocent, but his three-point shooting has set the league on fire and has made him a household name worldwide. Curry was at the heart of the Warriors’ record-setting campaign last year, which saw them win an NBA regular-season record of 73 games, as Curry become the first unanimous MVP in league history.

Curry’s ascendance has been extraordinary for a player who entered the league with question marks over his health and ability to translate his college game to the professional environment.

Despite his newfound popularity, other elite players within the NBA are not as impressed. Marcus Thompson is the author of a new book about the rise of Curry, and he revealed that Curry’s sudden upsurge has created a disdain among his competitive peers.

Thompson discussed this with Jason McIntyre of The Big Lead:

“Steph wants to be accepted by all these guys. this is what he worked for. For [them] to say, ‘You’re one of us.’ It seems like they don’t want to give that to him.

“Generally, I think it was all so sudden. [Curry] leapfrogged a whole lot of people. There’s a whole lot of people who never got the adoration Steph gets … they don’t like that. Players who were probably Hall of Famers [were saying], ‘Nobody ever anointed me like this.'”

LeBron James, Chris Paul and Russell Westbrook are names mentioned in the book who are not captivated by Curry or his success, perhaps feeling the former Davidson College product doesn’t deserve the limelight after others have been at the top for so long without the same recognition.

Thompson touched on what Paul felt about the situation:

“Chris Paul was one of those guys. Chris Paul was somebody [Curry] looked up to. Chris Paul used to dominate that matchup. Chris Paul was supposed to be next in line to win a championship. Then, suddenly, it was Steph … that’s another relationship where [Curry] was like, ‘Oh, I look up to you,’ and suddenly there is this disdain vs. Steph. There’s a lot of those. “

Curry may have won the fans over, but it seems his peers will be need a little more convincing in order to fully recognize his greatness.