Don't Miss
Home / Videos / Video: LeBron James Discusses Whether or Not Defending Kevin Durant Is Wearing Him Down

Video: LeBron James Discusses Whether or Not Defending Kevin Durant Is Wearing Him Down 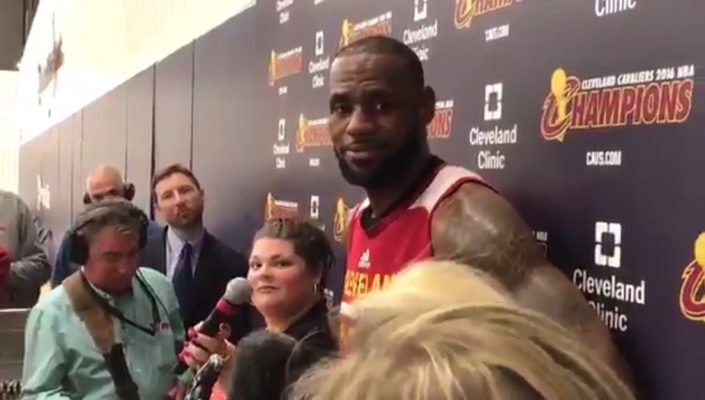 With the Cleveland Cavaliers having dropped the first two games of the NBA Finals to the Golden State Warriors and LeBron James playing in his seventh consecutive Finals, the inevitable questions about fatigue negatively affecting James have cropped up. Those notions were tied into asking about the arduous task of trying defend against the Warriors’ Kevin Durant.

However, during Wednesday’s shootaround, James dismissed such questions simply by talking about his production level during the first two games of the series:

"Do I look tired? I'm averaging a triple-double in the Finals. I'm pretty good." (via @CourtneyRCronin) pic.twitter.com/04QMID9mhS

James’ quick assessment was accurate: In Game 1 last Thursday, he scored 28 points, hauled down 15 rebounds and handed out eight assists. During Sunday’s Game 2, he tossed in 29 points, dished out 14 assists and grabbed 11 rebounds, giving him an average of 28.5 points, 13.0 rebounds and 11.0 assists in two games. The problem for James is that most of his teammates, outside of Kevin Love and Kyrie Irving, haven’t contributed much on the offensive end of the ball.

The need for the Cavaliers to win Game 3 on Wednesday night requires that James and his teammates step up their game, since a loss will effectively end the series. That’s because no NBA team has ever come back from a 3-0 deficit to win a best-of-seven series. Last year, the Cavaliers also trailed 2-0 entering Game 3 of the Finals, before then becoming the first NBA team ever to come back after trailing 3-1 in the Finals.