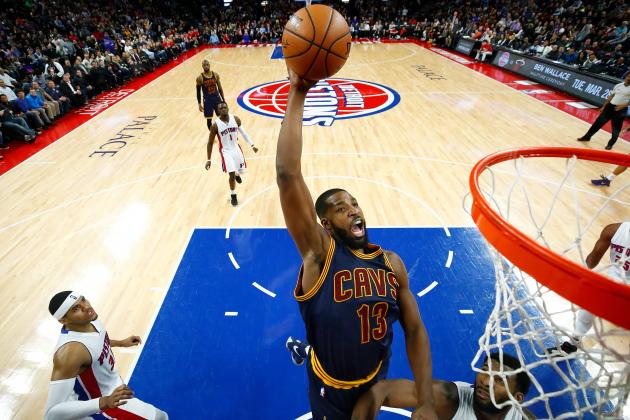 Despite the frustration expressed by Cleveland Cavaliers center Tristan Thompson over the end of his league-high streak of playing in 477 straight games, the team never considered changing their original plan of holding the six-year veteran out of the lineup on Wednesday due to a sprained right thumb.

Joe Vardon of Cleveland.com indicated that the Cavaliers had a very important reason in making their decision:

“The sprain is significant, a source said, and Thompson’s going to miss at least one more game (Friday at home against Atlanta), if not more.”

Vardon noted that Thompson was upset about the decision, with the center reportedly indicating that if Wednesday night’s win over the Boston Celtics had been a playoff game, he would have played with his thumb taped.

While sympathetic to Thompson wanting to continue a streak that’s lasted more than five years, Cleveland head coach Tyronn Lue looked to get past that disappointment as quickly as possible:

“Feel bad for Tristan because he is the iron man and he wants to play every single night,” Lue said. “It’s just something that’s a little bump in the road, so we’ll get over it, he’ll get over it and then we’ll move on.”

Thompson was limited to watching the game on television, though he did send out a tweet soon after the game had ended:

Despite Thompson’s absence, the Cavaliers held a 51-38 in the rebounding category during their 114-91 rout of the Celtics. After the game, LeBron James spoke about the team’s ability to compensate for not having Thompson:

“It’s always a team effort for us rebounding and it’s even more of an effort when you get a guy like Tristan out,” James said. “He demands rebounds on our team with Kev (Kevin Love), and I try to sprinkle some in as well. Channing (Frye) coming in and giving us eight rebounds was huge.”

Thompson’s absence likely means that the team’s newest addition, Larry Sanders, could see some extended play during the regular season’s last four games, especially since the first three come within a four-day span. Against Boston, he played only four minutes during the latter stages of the game.

“We wanted to get him to the D-League where he can kind of get his legs under him and fly under the radar and just prepare himself to get ready for this moment,” Lue said. “This moment is here now and he’s done a good job in the D-League, so. He’s not going to come in and automatically save the day in one game. But to get this kind of experience going forward will be good for him. We’re going to get him out there and kind of see what he can do. We’re confident that he can do some good things.”

The Cavaliers’ next two games will both be against the Atlanta Hawks, with the first game taking place at Quicken Loans Arena on Friday night, followed by a rematch in Atlanta on Sunday afternoon.