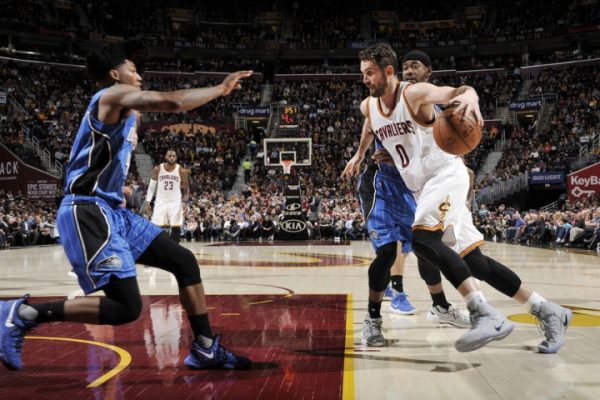 (Cleveland, OH) – A 43-point third-quarter eruption by the Cleveland Cavaliers blew open a close game and helped them knock off the Orlando Magic by a score of 122-102 at Quicken Loans Arena on Tuesday night.

The Cavaliers connected on 71 percent of their shots from the field during the quarter, doing plenty of damage via the 3-pointer by hitting nine long-range bombs. The team’s ball-handling was so smooth that they managed to pick up an assist on all but one of their 17 field goals during the period.

With the score deadlocked at 67 apiece, the Cavaliers used the last 8:16 of the period to go on a 29-10 run and took complete control of the game in the process. The Magic were able to slice the margin down to 12 midway through the fourth quarter, but that would be as close as they would get.

“Defensively, we were able to get stops and the effort was there,” Cavs head coach Tyronn Lue said in explaining the third-quarter success. “Plus, we got on a run. In the second half, we played Cavaliers basketball.”

The Cavaliers did most of their damage on offense through the efforts of four starters, who combined for 89 of the team’s 122 points. LeBron James collected another triple-double with 18 points, 11 rebounds and 11 assists in 37 minutes, while Kevin Love led all scorers with 28 points and picked up a double-double with 11 boards.

“Ty (Lue) just urged us at halftime to play our game,” Love said. “We’ve been playing better basketball lately and when we play downhill, we’re tough to beat and it showed tonight.”

In the backcourt, Kyrie Irving tossed in 24 points and eight assists, while J.R. Smith was deadly from three-point land in amassing his 19 points. Smith finished 5-of-8 from long-range, picking up all but one of those treys in the third quarter. Among the reserves, the return of Kyle Korver after missing the last 11 games resulted in the sharpshooter hitting for 11 points, including a trio of 3-pointers.

Lue spoke about Smith’s recent success as he continues to get back to full strength after sitting out three months because of injury:

“That was very encouraging and he’s been that way the last four or five games,” Lue said. “We need his energy and activity.”

“Obviously, J.R.’s found his rhythm and that was was good to see,” James said. “When he’s hitting shots like that, it works wonders for our club.”

The barrage of 3-pointers helped put the Cavs in rare territory as they became only the third team in NBA history to hit 1,000 3-pointers in a season.

During the first two quarters, Cleveland struggled for most of the half. Orlando was sparked by a 15-3 run and held a 31-28 advantage after one period. Throughout the first half, the Magic dominated the offensive side of the glass and also reached the free-throw line 14 times, converting each attempt.

“We’re not fully healthy yet. We’re still working out the kinks,” James said. “Once we do that, we can play Cavaliers basketball and go from there.”

The Cavaliers now head to Boston for a pivotal Wednesday night contest that could very well determine the top seed in the Eastern Conference playoffs. That would ensure homecourt advantage for the first three rounds of the postseason.

Despite the importance of the contest, James downplayed the significance of it:

“Don’t ask me that question. I’ve been to six straight finals. I’m the last person to talk about a big regular season game.”