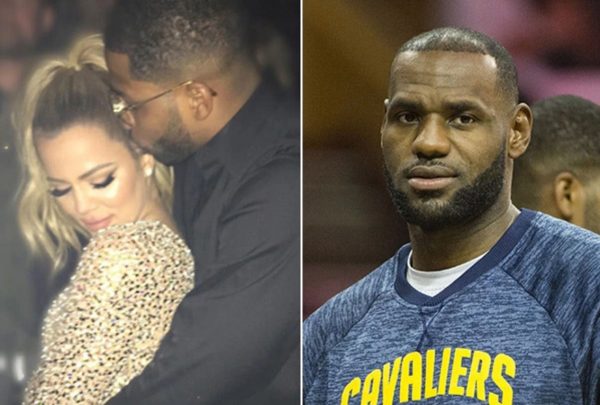 The continuing struggles faced by the Cleveland Cavaliers this season have seen them battle through injuries, frequent roster changes and the grind of an 82-game schedule as defending NBA champions. Now, one source is stating that LeBron James is jokingly attributing those issues to a curse, also known as the “Kardashian Curse,” placed on the team by Tristan Thompson’s girlfriend Khloe Kardashian.

Last summer, the 26-year-old Thompson began dating 32-year-old reality television star, with the two still maintaining their relationship as the regular season comes to an end. An unnamed source spoke to HollywoodLife.com and noted that James had joked about how that relationship has cursed the team and has caused its recent struggles:

“The Cavs haven’t been playing up to their potential lately, and they’re coming up with every reason possible for their bad play,” the source said. “LeBron actually joked and talked about the Kardashian curse being real.”

That source also indicates that Thompson is reportedly being avoided by teammates:

“The Cavs are dodging Tristan now,” the source said. “Everyone is superstitious that Khloe and the curse have something to do with their poor play.”

Thompson himself has had some bad luck recently, sustaining an elbow to the mouth during the Cavs’ March 19 game against the Los Angeles Lakers. Meanwhile, other teammates have battled through injuries over the past six months, most notably guard J.R. Smith and forward Kevin Love. In addition, just 58 seconds into his Cavaliers career, center Andrew Bogut suffered a season-ending tibia fracture of his left leg.

Kardashian was formerly married to Lakers forward Lamar Odom and has also dated Houston Rockets guard James Harden. Following the breakup of the Kardashian-Odom marriage, Odom nearly died after being found unconscious in a Nevada brothel, while Harden’s game has flourished this season since ending his relationship with the reality star.