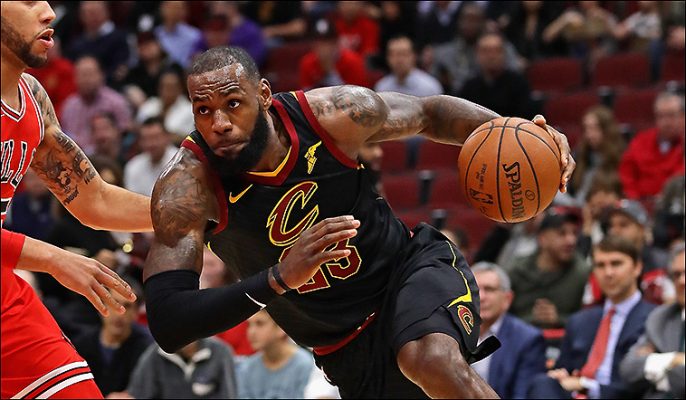 (Chicago, IL) — A pair of lethal first-half runs helped lay the groundwork for the Cleveland Cavaliers to pick up their 12th straight victory as they easily defeated the struggling Chicago Bulls by a score of 113-91 at United Center on Monday night.

Kevin Love led the Cavaliers with his 16th double-double of the year, collecting 24 points and 13 rebounds. Meanwhile, Dwyane Wade came off the bench to notch 24 points and six rebounds, while LeBron James added 23 points, seven rebounds and six assists. The only other Cavs player to score in double figures was reserve Jeff Green, who finished with 14 points and also hauled down eight boards off the glass.

“For me it’s always been about health and I’ve been healthy,” Wade said about his effectiveness during the team’s winning streak. “Coach (Tyronn Lue) gives us days off, they allow me to play my game and these guys help spread the floor.”

The Bulls entered the game with a 3-18 record and losers of their last eight, yet were actually in control during the first five minutes of the game. They scored the first six points of the game and had held a 9-3 lead, but then watched the Cavaliers put together an 18-5 run that gave the visitors a 21-14 lead.

“We’re so much better when we get off to a good start and that includes the third quarter as well,” Love said after the game.

Chicago managed to cut the margin to three with two minutes left in that first period, but that led to another surge by Cleveland. Forging a 17-2 run, including scoring the first 11 points of quarter number two, the Cavaliers took a commanding 40-22 lead and never allowed the margin to get below 12 points before intermission arrived. At that point, the Cavs were ahead by a score of 61-45.

“I just try and make plays for my teammates and we were in a good flow tonight,” James said. “We’ve just got a good group. From 1 to 15, we defended.”

During that first half, Cleveland managed to shoot 55 percent from the field, including 60 percent during the opening period. The two runs could be explained in part by the Bulls hitting on just 36 percent of their shots from the field in that first quarter.

“The guys are picking it up, even though we’re playing a different style than we’re accustomed,” Lue said.

Outscoring the Bulls 13-5 to start the third quarter helped give the Cavs a 24-point lead at 74-50, with that lead never seriously challenged over the rest of the game. The chief driver in helping keep the Bulls at bay was Love, who tossed in 16 points during the quarter, which ended with the Cavaliers holding an 86-68 advantage.

“Ty (Lue) wanted me to come out in the first few minutes (of the third quarter) and be aggressive and I was,” Love said. “I got a lot of really good looks.”

The Cavs then built the lead up to 25 at 105-80 midway through the fourth, which allowed for the reserves to help close out the contest. That bench ended the night with another strong collective performance with 49 points spread among five players.

“Just having new pieces and not going through what we did the last three seasons,” Lue said about what differences set this year’s team apart. “Guys have figured it out.”

The Cavaliers will return home on Wednesday night for a matchup against the Sacramento Kings, with tipoff set for just after 7 p.m. If the Cavs are able to pick up that victory, they’ll tie the franchise record for consecutive victories at 13.

“They’re (Bulls) a team that’s young and trying to find their way, and right now they’re struggling,” Wade said. “Once we got the lead, we never looked back.”