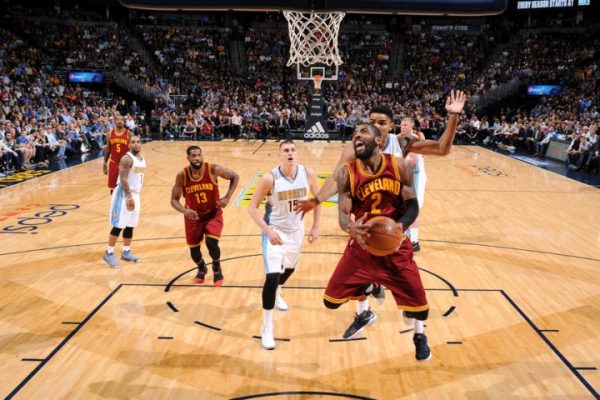 (Denver, CO) – Despite 33 points from Kyrie Irving, persistent struggles on defense all night sent the Cleveland Cavaliers to a 126-113 defeat by the Denver Nuggets at Pepsi Center on Wednesday night.

The Nuggets hit on 53 percent of their shots from the field, handed out 33 assists on the night and scored 70 points in the paint. The Cavaliers were unable to keep up that breakneck pace, as Irving’s 33 made him one of only three Cavs players to reach double figures. Deron Williams scored 19 points and LeBron James contributed 18 points, while adding six rebounds and five assists.

“We just weren’t executing, that’s what it comes down to tonight,” Irving said. “Honestly, we need some more practice time because it’s going to take a while for us to get things down.”

Two players that struggled for most of the game for Cleveland were J.R. Smith and Kevin Love. Smith was just 1-of-7 from the field and Love missed six of his last seven field-goal attempts after connecting on a pair of 3-pointers to start the game.

“They kicked our butts in every facet of the game,” Cavs head coach Tyronn Lue. “There’s got to be more urgency and more focus by us. That comes from all of us. It starts with the coaches, but the players have to look themselves in the mirror, too. They’ve got to be more physical, bring a more physical presence and they have to take pride in guarding their man.”

Those frequent breakdowns on defense put the Cavaliers in a double-digit hole during the first half, falling behind by as many as 20 points. In the first quarter, the problem was the play in the paint, with the Nuggets seemingly driving at will to the basket. In the second period, they fell victim to long-range shooting, with Denver drilling seven 3-pointers.

“You never want to have games like this, but it’s been a while since we’ve played like that,” Love said. “We’ll clean it up.”

By the time halftime had arrived, the Cavs had reduced the margin to 14 at 73-59. However, the Nuggets walked off the court having hit on 59 percent from the field and 56 percent on 3-pointers, collecting 20 assists along the way.

“They played an exceptional game and our physicality wasn’t what it was supposed to be,” James said. “We’ve got to be more physical and take the one-on-one challenge more seriously.”

After the break, Cleveland used a 15-4 run to get within five points with 5:39 left in the third quarter. That momentum died when the Nuggets answered with a 15-3 run that pushed their lead back up to 17 points at 101-84. The Cavaliers closed with six unanswered points to make it an 11-point deficit entering the final quarter, but in that last period, the Cavs were not only unable to get any closer, but fell behind by as many as 21 before Lue emptied his bench to close out the game.

“Tonight, their ball movement meant you couldn’t relax,” Lue said. “We’ve got to take more pride in our defense.”

On Friday, the Cavaliers will close out their four-game road trip with a game against the Charlotte Hornets that will tip off shortly after 7 p.m.