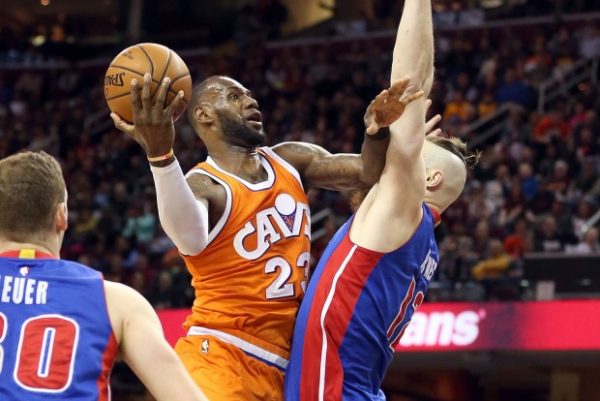 (Cleveland, OH) – Thanks to unconscious shooting during the first half, the Cleveland Cavaliers were able to get back on the winning path and coast to an easy 128-96 victory over the Detroit Pistons at Quicken Loans Arena. The win avenged a road loss to the Pistons just five nights earlier.

The Cavaliers connected on 23 of their first 26 shots from the field, an incredible run that allowed them to jump out to a 60-33 lead with 8:15 left in the second quarter. During this stretch, the Cavs connected on their first 10 3-pointers and were able to spread the ball around, with nine different players putting points on the board.

“Ball movement, plus we had bodies moving,” LeBron James said in explaining the early success. “It’s one of those games in a blue moon and tonight happened to be it for us.”

Indicative of that sharing philosophy, Cleveland collected 19 first-half assists, including nine from James. While the Cavaliers cooled off to a mere 69 percent shooting from the field by the end of the first half, their defense clamped down on the Pistons during the second quarter by limiting them to 25 percent shooting from the field. That allowed the Cavs to take a 74-48 halftime lead.

“Executing our game plan at a very high level. It’s our job to go out and execute it,” Kyrie Irving said in response to how the Cavaliers were able to thrive all night. “When the ball’s hopping, ball movement’s great, we’re a tough team to beat.”

The third quarter saw the Cavaliers never seriously threatened as they were able to boost their advantage to as many as 35 points before closing out the quarter with a 104-70 advantage. That allowed head coach Tyronn Lue to empty his bench as garbage time ensued.

“It’s been a while since we’ve put a team away in the third quarter and were able to rest our starters for the entire fourth quarter,” Lue said.

Irving led all scorers with 26 points and six assists, yet it was another triple-double that was the performance highlight of the night. James finished with 16 points, dishing out 12 assists and grabbing 11 rebounds for his fifth double-double in the last nine games and 10th of the season.

“He hasn’t done anything different,” Lue said about James. “He’s in a great rhythm the last couple of months and is playing great.”

In contrast to a number of previous instances, the Cavs’ reserves were able to put forth a strong effort in maintaining the huge lead. The blowout also allowed newcomer Larry Sanders to make his Cleveland debut, missing one shot and picking up a foul in a little under two minutes of action.

“I had a ball boy go up and ask Griff (general manager David Griffin). He said two minutes,” Lue said in response to a question about playing Sanders. “I just wanted to introduce him to the crowd. He liked the ovation he got.”

Rounding out the double-figure scorers for the Cavs, Iman Shumpert contributed 18 points, Richard Jefferson added 16 and each Williams also cracked double-figures. Deron Williams delivered 13 points and Derrick Williams tossed in 10. On the rebounding side, Tristan Thompson grabbed nine boards off the glass.

Two team numbers on the night that were worthy of note for the Cavaliers were the 19 3-pointers and the 29 assists. Meanwhile, their defense limited the Pistons to just 37 percent shooting from the field and held them to just four 3-pointers on the evening.

The Cavaliers will be home on Thursday night for a game against the Utah Jazz that will tip off just after 7 p.m. ET. After that contest, they’ll begin a four-game road trip, primarily against Western Conference squads.