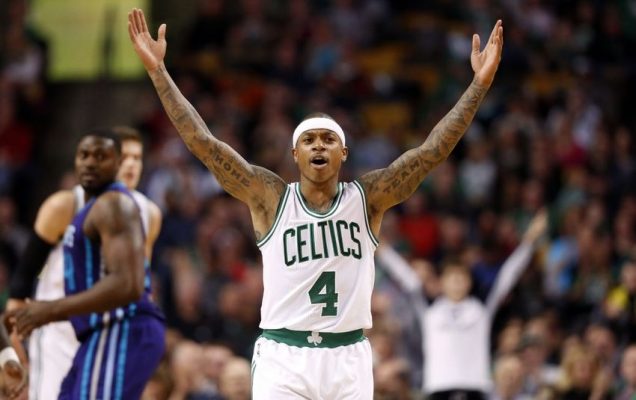 The playoff-like atmosphere of the Cleveland Cavaliers’ 103-99 road loss to the Boston Celtics had Celtics guard Isaiah Thomas offering a postgame opinion on his abilities after scoring 31 points in the victory. While the remarks were directed at the NBA at large, the Cavaliers no doubt took notice of the comments.

Thomas took issue with a question from a reporter who noted that the Cavaliers had appeared to have held him in check before the fourth quarter:

“Nobody holds me in check,” Thomas said. “I made plays. I average 30 points for a reason. I made plays. They double me, I pass it to Jae (Crowder), he hit a shot. I pass it to Avery (Bradley). I believe in my teammates. Then, I hit a 3-pointer where they miscommunicated on their coverage. But my job, every day, no matter what the defense throws at me, is to make plays, score the ball and I try to do that to the best of my ability.”

Much has been made of the 5-foot-9 Thomas being the last player selected in the 2011 NBA Draft. That was when the Cavs’ Kyrie Irving was selected first overall and his teammate, Tristan Thompson, was chosen three spots later.

Thomas has seen his offensive numbers increase over the course of his six-year career. He’s currently averaging 29.6 points per game and handing out 6.2 assists per contest. Thomas has had five games of 40 points or more this season, topped by his 52-point performance against the Miami Heat on Dec. 30.

Cleveland will face Boston one more time, with its April 5 contest taking place at TD Garden. Currently, the Celtics are just three games behind the Cavaliers in the race for best record in the Eastern Conference, with the possibility of the two teams facing each other during the postseason becoming a stronger possibility.