LeBron James Discusses If Rivalry Exists Between Him and Stephen Curry 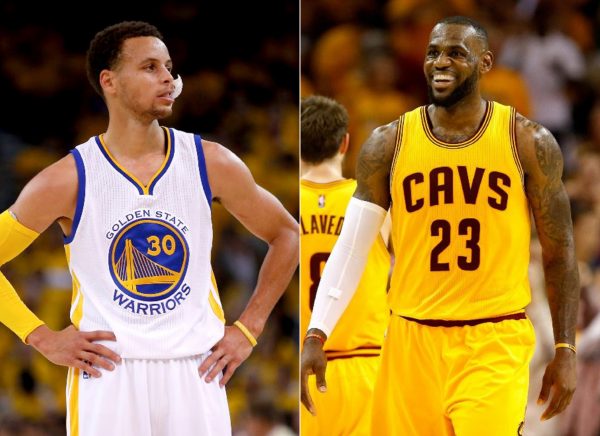 Over the past two years, the NBA Finals battles between the Cleveland Cavaliers and Golden State Warriors have led to the belief that a rivalry exists between Cavs forward LeBron James and the Warriors point guard Stephen Curry. Another Finals matchup could occur again this year, yet the premise of a rivalry between those two players is one that James rejects.

James spoke to media assembled at NBA All-Star Weekend in New Orleans and noted one similarity between the two players was that James has won four Most Valuable Player awards, while Curry has won the last two MVP accolades. In Curry’s case, his award last year marked the first time ever that a player had won it unanimously.

However, he dismissed any further connection:

“I don’t have a rivalry with Steph Curry,” James said. “There’s no way you can say, ‘Let’s talk about rivalries,’ and you say, ‘[Larry] Bird and Magic. Carolina, Duke. Ohio State, Michigan,’ and then say ‘LeBron and Steph.’

“It’s disrespectful to those other three that I just named that you would even try to put us in the class with that. We haven’t had enough battles, and who’s to say we will have future battles. We’ll see, but to put us in a category with [them], it’s impossible. You can’t do it.”

This isn’t the first time that James has rejected the idea of a rivalry in connection with Golden State. Last month, he said the same thing about the Cavaliers and Warriors, who regularly meet only twice during the regular season.

On the contrary, Warriors forward Draymond Green said he felt that a rivalry definitely exists, regardless of James’ beliefs:

“I think this is a rivalry,” Green said last month. “It’s definitely fun. A team that you beat, beat you, it’s definitely fun. If you look at the last two years and this year, we’ve been the top two teams in the league each year, and so I look at it as a rivalry, and it’s definitely a fun game to play in. But I don’t really care if anyone else sees the game the way I see it. I see how I see it, and they can see it how they see it.”

Both Cleveland and Golden State currently have the best records in their respective conferences. James’ heavy workload thus far this season has raised concerns that the first-time event of the same two teams facing each other in the NBA Finals for three consecutive years might not occur because of the fear that the 14-year veteran will run out of gas. Once again, James dismissed such talk:

“I have enough left for whatever,” James said. “I was ready to play another Finals after Game 7 of last year. Just give me one or two days’ rest, and I’ll be ready to go again.”

The Cavaliers resume play on Thursday night when they host the New York Knicks in a nationally televised game on TNT. Tipoff will take place just after 8 p.m.