Video: Draymond Green Reacts to LeBron James Being in Discussion for G.O.A.T. 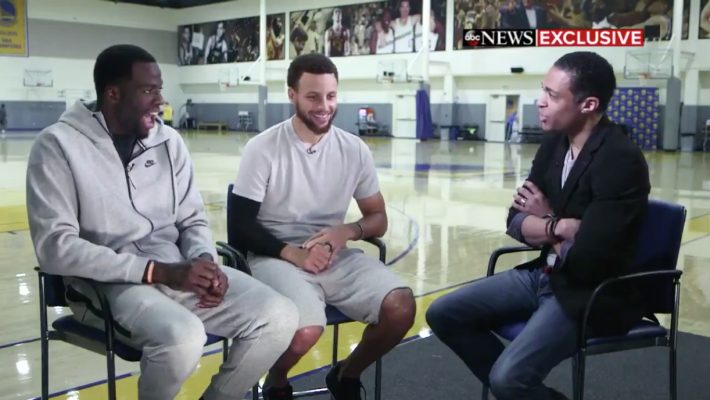 In any discussion of the greatest basketball player of all-time, the name of Cleveland Cavaliers forward LeBron James continues to garner increased support as he continues to rack up one record after another. As he gets set to compete against the Golden State Warriors in what will be his seventh consecutive NBA Finals, one of his competitors on the Warriors, Draymond Green, discussed whether he believes that James is close to being the G.O.A.T. (greatest of all-time).

Not surprisingly, in a dual interview with teammate Stephen Curry, Green provided all of the conversation on the topic:

“It don’t really matter,” Green said. “He can have that title, he just can’t have his ring, that’s all. That’s our goal. Our goal isn’t to make everyone say, ‘Hey, LeBron’s the greatest of all-time.’ More power to him. Go ahead. At the end of the day, it’s all subjective, anyway.

“As a peer, he’s had an amazing career and he’s still doing amazing things. I could care less if anyone says LeBron is the greatest of all-time. The only thing I care about is they can’t say that LeBron is the 2017 NBA champion. Beyond all that, they can have it, he can have that. We want a championship and that’s the goal.”

Last year, it was Green’s Game 4 punch at James’ groin that got him suspended for the next contest. That absence played a part in sparking the Cavaliers to three consecutive victories, becoming the first NBA team ever to win a Finals after trailing 3-1.

The Cavaliers and Warriors will get the Finals going on Thursday night in Game 1, with tipoff set for just after 9 p.m. ET.