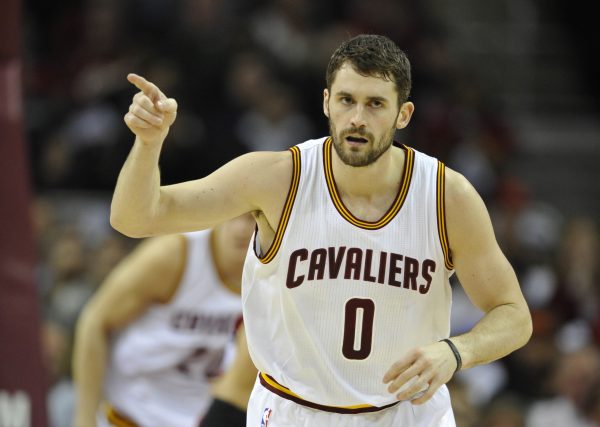 The knee injury that’s sidelined Cleveland Cavaliers forward Kevin Love for the next six weeks has ended up undercutting his opportunity to play in Sunday’s All-Star Game in New Orleans. However, the forward took time on Thursday afternoon to acknowledge his Cavalier and All-Star teammates LeBron James and Kyrie Irving via social media. That duo will represent Cleveland in the contest.

Using Instagram to express his feelings about James and Irving, Love offered a photo of the trio after they had received their All-Star jerseys at a recent Cavs home game:

Want to wish my brothers @kyrieirving and @kingjames a successful weekend at All Star in NOLA. Wish I was sharing the court with you on Sunday…Ky get yourself another one on Saturday night boiiiiiii ?????

Love underwent arthroscopic surgery on Tuesday and is expected to be out until the end of March. He had been selected to play in the All-Star Game for the fourth time in his career and first as a member of the Cavaliers. During his time as a member of the Minnesota Timberwolves, Love played for the Western Conference All-Star team three times in 2011, 2012 and 2014.