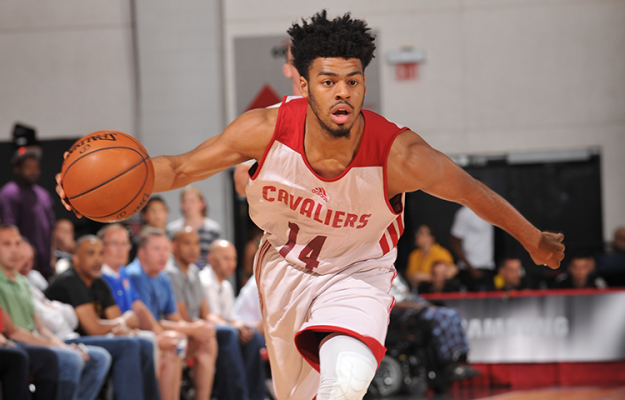 When the Cleveland Cavaliers opened their preseason Wednesday night at Xavier University in Cincinnati against the Atlanta Hawks, point guard Quinn Cook was one of six camp invitees looking to further stake a claim to what is perceived as the one roster spot available before the start of the regular season.

Cook went undrafted despite being the second-leading scorer on Duke University’s national championship team. After representing the Oklahoma City Thunder in summer league play, he was signed last month by the Cavs, who will rely primarily on Mo Williams and Matthew Dellavedova for however long Kyrie Irving remains sidelined.

The chances of Cook being on the 15-man roster the night of Oct. 27 in Chicago remain a long shot. But he left a favorable impression on those in attendance at Monday’s Wine and Gold Scrimmage at Quicken Loans Arena by giving Dellavedova, who took a similar free-agency path to the NBA, all he could handle at both ends of the floor.

“I’ve been fighting my whole life. Fighting to get in a position to be in high school. Fighting to get playing time at Duke and fighting now for a roster spot. I’m used to fighting, and I’m just happy to be at this point, happy that the Cavaliers are giving me this opportunity.”

He has another source of motivation – the memory of his father, Ted Cook, who grew up in the Cleveland area and played high school basketball at Glenville before attending Howard University in Washington D.C. Ted and his wife raised Quinn and his older sister while impressing upon them the importance of hard work and education.

Those lessons were put to the test when Quinn was 14 and Ted suffered a heart attack which eventually took his life. The profound impact of that event, he told Haynes, continues to impact him today.

“When I lost my dad, I could have made another choice and stopped going to school, using that as an excuse,” he said. “I went through my time where I struggled growing up and being the only man where my mom couldn’t really control me. I was skipping school and getting in trouble.

“Then my friends started getting caught up in the streets and that woke me up. I lost a couple of friends due to senseless violence. I was lucky to have made a choice, and having people around me not letting me fall into that nonsense. I just try to stay motivated so I don’t let down the people that got me here. I don’t want to let him (Duke coach Mike Krzyzewski) down after he vouched for me. I don’t want to let my whole family down.”

In addition to Cook, the invitees hoping to catch the eye of David Blatt and his coaching staff in game situations are fellow guards Jared Cunningham and D.J. Stephens, forwards Austin Daye and Nick Minnerath, and center Chris Johnson. Cook had 13 points and four assists in the scrimmage, while Cunningham finished with 11 points and Stephens wowed the crowd with a pair of electrifying dunks.