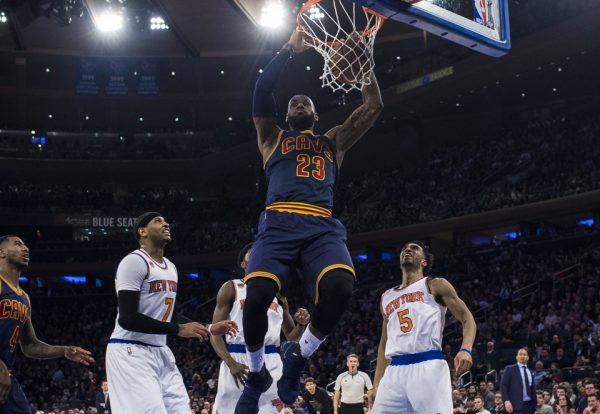 (New York, NY) – Double-doubles from LeBron James and Kevin Love helped make up for the absence of Kyrie Irving as the Cleveland Cavaliers held off a huge comeback by the New York Knicks to pick up a 111-104 victory on Saturday night at Madison Square Garden.

Irving sat out the game with a right quad contusion, but James and Love met the challenge by combining for 55 points on the night. James served as the team’s main playmaker, finishing the night with 10 assists to go along with his 32 points, while Love tossed in 23 points and 16 rebounds.

The game wasn’t without a number of nervous moments down the stretch, though, as the Cavaliers watched a commanding 27-point lead in the latter part of the third quarter dwindle down to a mere 10 points with 7:27 left in the game.

Then, with 3:38 remaining, the margin stood at just nine points and at the one-minute mark, the Knicks had reduced the margin to just five. Love’s 3-pointer from the right corner with 44.4 seconds left ended the threat of a collapse and allowed the Cavaliers to boost their season mark to 34-15.

“We didn’t close the (third) quarter right and they got momentum,” James said immediately after the game. “We were able to make some timely shots and get the win.”

Only three other Cavs players ended the night scoring in double figures, with Channing Frye and Kyle Korver coming off the bench to score 14 and 11 points, respectively. Tristan Thompson added 12 points and five rebounds.

Early on, the Knicks were able to jump out to an early 8-3 lead before the Cavaliers awoke and traded baskets until taking the lead for good on a Thompson dunk with 4:49 left in the quarter. That sparked a 17-7 run for Cleveland that gave them a 34-25 lead after one period, with Love and James providing 18 of those points between them.

The push continued in the second quarter, primarily due to the devastating impact of the 3-pointer, with the Cavs closing out the half with 10 long-range bombs. That allowed them to push their lead up to as many as 21 and sent them intermission holding a 64-45 lead. Defense also helped expand the lead, with the Knicks connecting on just 37 percent of their shots from the field in the second period.

New York had a good start and strong finish to the third quarter, but a 19-5 run by Cleveland ended up being crucial to the win. The Knicks began by scoring seven of the first eight points before the Cavaliers began their surge to take their biggest lead at 84-57. However, over the final 2:30, the Knicks ran off the last 11 points of the period and made it an 84-68 game with 12 minutes left.

The contest marked yet another milestone in James’ career as he became only the eighth NBA player ever to score at least 28,000 points in his career. Even more impressively, he’s now the youngest in league history to accomplish that feat.

“We have a four-game road trip and this was a great way to start the trip,” James said.

The challenge now becomes a good deal tougher for the Cavaliers as they travel to Washington for a game on Monday night against one of the NBA’s hottest teams. The Wizards have won 17 of their last 21 games, including their last seven and 11 of their previous 12 contests. Tipoff for that game will be just after 7 p.m. ET.