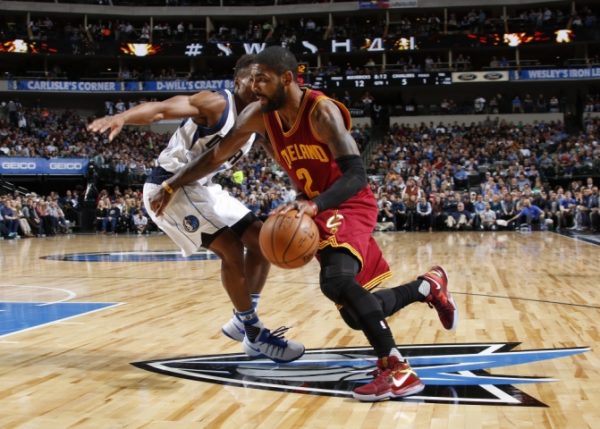 (Dallas, TX) – A combination of being unable to clamp down on defense in crucial stretches and committing 17 turnovers proved to be costly for the Cleveland Cavaliers as they dropped a 104-97 decision to the Dallas Mavericks at American Airlines Center on Monday night.

Each time the Cavaliers tried to make a comeback, they ended up being thwarted by key baskets on the part of the Mavericks. This developed into a pattern from the time Dallas moved into the lead for good during the second quarter until the final buzzer.

“We had some guys in different rotations and we got in some early foul trouble, but we’ll figure it out,” LeBron James said after the game in discussing the turnover problems.

James led the Cavaliers with 23 points and came close to another triple-double with nine rebounds and nine assists. Meanwhile, Kyrie Irving tossed in 18 points, five rebounds and five assists. The only other starter to score in double figures was Richard Jefferson with 11 points, while Tristan Thompson was held scoreless to go with his eight rebounds.

“We had a lot of great looks, but they capitalized on our mistakes,” Irving said. “We all have to be better. For us to be great, we have to be more efficient.”

Missing the injured Kevin Love, Cleveland’s bench had just two players score in double figures, with Channing Frye notching 13 and Jordan McRae adding 11 to the cause.

“It (missing Love) limits your rotation and the guys just didn’t have it coming off the back-to-back,” Cavs head coach Tyronn Lue said.

A good portion of the first half saw each team put together runs in an effort to take control of the game. The Mavericks began by opening the game on a 14-5 surge before the Cavaliers answered back with a 21-5 run over a five-minute span to take a 26-19 lead. However, Dallas would start up another run just prior to the first quarter concluding.

“We had our chances, but toward the end of the first quarter, our legs started getting under us,” James said.

By the time that push was over, the Mavericks had put together a 20-7 run to take a 39-33 lead and ended up taking a 55-50 lead into halftime. Dallas was able to make their move thanks to 57 percent shooting from the field during that second period.

“Tonight we tried, but they had a lot of good matchups against us,” Lue said. “They were faster than us and did a better job of attacking.”

In the third quarter, the Cavaliers only got past that five-point deficit once, with that taking place early in the period. During the final three minutes, the Mavericks scored eight of the final 10 points to give themselves an 81-70 lead entering the final quarter. Those final 12 minutes were a repeat of the earlier quarters, with Cleveland not being able to get closer than seven points the rest of the game.

“Tonight, they ran their offense perfectly and we made too many mistakes,” Frye said. “We need to crack the glass better, get back on defense and be more aggressive.”

The Cavaliers will return to action on Wednesday night when they host the Minnesota Timberwolves in a game that will tip off shortly after 7 p.m. The contest will be broadcast nationally on ESPN.

“We had a crazy lineup tonight, but we have to be professional about it and be able to adapt,” Irving said.