Cleveland Cavaliers vs. Phoenix Suns Game Recap: Back in the Winning Groove 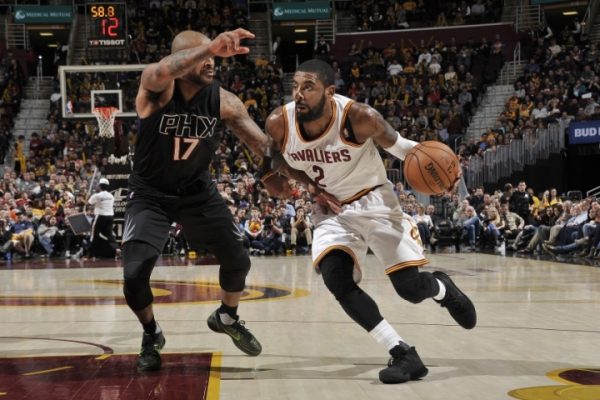 (Cleveland, OH) – Five different players scoring in double figures, led by Kyrie Irving’s 26 points and a near triple-double by LeBron James, helped the Cleveland Cavaliers return to the win column with a 118-103 victory over the Phoenix Suns at Quicken Loans Arena on Thursday night.

Irving led all scorers with his output and also added three assists, while James notched a double-double with 18 points and 15 assists, narrowly making it a triple-double by also adding nine rebounds.

“(I was) just trying to find the right pass, the right plays, reading the defense,” James said immediately after the game in reference to his assist total. “I kind of took it upon myself to change what we didn’t do on the road trip and that’s get the ball moving, get the ball popping and our guys did a great job of being ready to catch-and-shoot, catch-and-lay, catch-and-dunk. So it’s a good way to start our homestand.”

Channing Frye was next on the Cavs’ scoring parade with his own double-double, scoring 18 points and swiping 10 boards off the glass. Frye’s effort off the bench was indicative of the dominance that Cleveland’s second unit showed during the game, outscoring Phoenix, 38-14.

“I think our pace was good, we were working through our mistakes and grinding it out,” Frye said.

Rounding out the quintet of double-digit scorers was the duo of Iman Shumpert and James Jones, who scored 17 and 14 points, respectively. The bulk of the damage they did on offense came via the 3-pointer as Shumpert drilled five long-range shots and Jones four of the team’s 19 on the night.

“He’s back in his comfort zone and he’s comfortable putting up 3-pointers,” Cavs head coach Tyronn Lue said about Shumpert’s role as a starter.

During the first quarter, Jones provided some early offense to allow the Cavaliers to begin building their lead. Playing in place of Kevin Love, Jones scored eight of the team’s first 15 points and helped the Cavs end the quarter with a 29-21 lead.

“He’s a true professional,” James said of Jones’ performance. “When his number is called, we know he’s going to be ready.”

Throughout the first half, the Cavs put up a harassing defense against the Suns by forcing 11 turnovers. They also clamped down on the Suns’ shooting during the second quarter, holding them to just 29 percent from the field. That allowed Cleveland to head into halftime holding a 59-41 lead. The key part of that second quarter came in a two-minute stretch midway through the period when the Cavaliers ran off nine unanswered points to take a 47-29 advantage.

After the break, the Suns made an effort to get back into the game, but couldn’t get any closer than 11 the rest of the way. Entering the final quarter facing a 13-point deficit at 89-76, they were held in check by the Cavs, who improved their record to 30-11 on the year. That matches the team’s record at the midway point last year, when Lue was shockingly elevated to head coach.

“It’s big any time you get production off the bench. When you get contributions like that, it helps the team,” Lue said. “I thought defensively we competed and had some good stops, but I thought they went to the free-throw line too much.”

Love sat out the game with lower back soreness, with the Cavs also receiving a huge scare during the latter portion of the second quarter. That’s because Tristan Thompson was taken to the locker room holding his hand, an issue that was quickly diagnosed as a dislocated finger. Thompson returned to play in the second half.