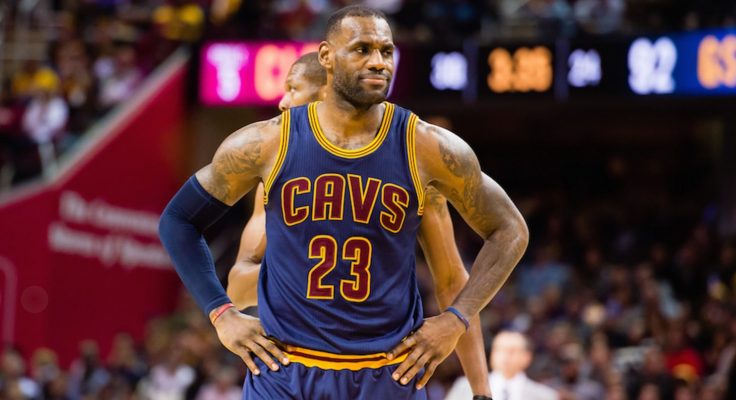 In his 14 seasons in the NBA, LeBron James of the Cleveland Cavaliers has established himself among the elite of not only the current group of NBA players, but with the greatest in league history. In the opinion of Cavs general manager David Griffin, he believes that James’ stature is even broader than that, comparing him to legendary baseball player Babe Ruth.

Griffin spoke to Michael Lee of The Vertical about James’ impact on the franchise, equating him with Ruth, whose name still resonates almost 70 years after his death.

“I’ve said this several times since, but you’re basically charged with the legacy of Babe Ruth, and it’s our responsibility to allow that legacy to grow and evolve,” Griffin said. “So it’s almost like a sacred trust that the kid gives you. He’s so good, in his own right, by himself, that he sort of mandates you have to be a title contender just by his presence alone … and if you don’t capitalize on the years he has left, then shame on us.”

James has sometimes been accused by critics of doing Griffin’s job for him. The derisive nickname, GM LeBron, has casted the veteran as a selfish individual, which angers Griffin.

“I take offense to it on [James’] behalf at times,” Griffin said. “He doesn’t like that image. I don’t think he wants that image. He wants to lead his troops. He wants to be a player. He wants to lead the guys from within. He never tried to do any more than that. I think for him, it’s almost an unfair characterization of him, that he’s some kind of overlord. That’s not at all what he does.”

Despite that image, Griffin isn’t afraid of bouncing possible moves off of James to gauge his opinion.

“I don’t think it’s unique for a superstar of LeBron’s magnitude to have input on things beyond just playing, but I also know how he’s treated the situation and he’s been incredibly understanding and perceptive of what we’re trying to build,” Griffin said. “LeBron has really been a partner in all of this.”

In Griffin’s mind, many of the players that he’s brought in through trades and other deals end up improving their game because of the connection to James.

“I call LeBron ‘Cheat Code’ at this point,” Griffin said with a laugh, “and the reason is, I know we’ll get almost all of a player’s strengths and really diminish a lot of his weaknesses, and it’s really [because of LeBron’s] presence for the most part.”

James himself is appreciative of the talent the team possesses, realizing that there are some limitations to the construction of the roster.

“I think, in order to win, you have to have talent around,” James said. “It’s not like we’re one of the more talented teams ever assembled. We got guys that play their role. We’ve got a couple of stars in Kyrie (Irving) and Kev (Kevin Love) that do their job at a high level, but we’re a team that also does the dirty work when need be. But the best thing about our team is the other guys that don’t get mentioned a lot do their job at an all-time high. And I appreciate that from them.”

Given James’ age and hunger for more titles, waiting for players to develop isn’t an option, which requires Griffin to take a higher level of risk than most general managers when it comes to making deals.

“Sometimes fear is a really strong motivator. And I think most people respond to fear of looking wrong, or looking bad, and we’re blessed in the sense that we don’t have the luxury to do that,” Griffin said. “We have a very small window and we need to capitalize and that means we’re going to do whatever it takes. That helps, I think, embolden all of us.”

James feels no such pressure and felt none when he decided to return to his original team in 2014 after four years as a member of the Miami Heat.