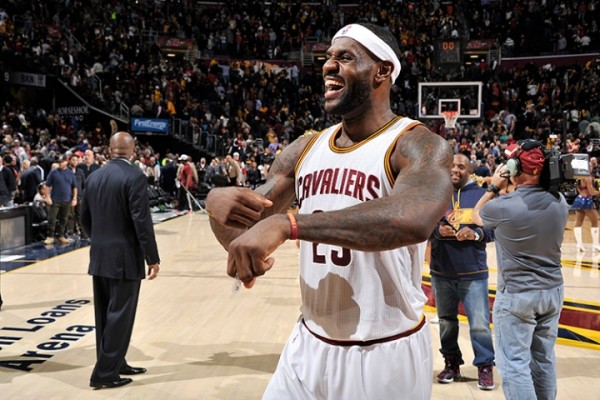 (Cleveland, OH) – LeBron James’ running hook with one second to play gave the Cleveland Cavaliers a dramatic 90-88 victory over the upset-minded Brooklyn Nets at Quicken Loans Arena on Saturday night.

With 16 seconds remaining, James had given the Cavs an 88-85 advantage by hitting a pair of free throws. However, just 1.3 seconds later, the Nets’ Joe Johnson was able to get J.R. Smith to foul him beyond the three-point line. Johnson then promptly converted all three free throw attempts to set up James’ heroics.

James was asked immediately after the game to describe how he prepares for such potential game winners and why the team has had to struggled during the season’s first month:

“I just get to a secluded area in my mind, I put myself at ease.” commented James. “We know that every team is going to give us their best shot.”

Cleveland head coach David Blatt first joked about the team’s final play, then spoke about the near-disastrous error by Smith:

“The play call: give it to number 23,” said Blatt about the strategy behind the play. “(J.R.) got caught in a screen, and that obviously wasn’t a good foul. Overall, J. gave us a good game.”

Despite the error, Smith’s defensive effort was evidenced by his four blocked shots, which tied an individual career-high for the guard.

Prior to that game-winner, the Cavaliers battled through a flat performance against heavy underdog Brooklyn, who held the lead for most of the first three quarters. With less than five minutes left in the game, the Nets held an 83-76 lead, but at that point, the Cavs charged back with eight unanswered points to set the stage for a dramatic finish.

James and Kevin Love shared scoring honors by each scoring 26, while James narrowly missed a double-double with nine rebounds. Love grabbed seven boards, while Tristan Thompson did reach that milestone with 10 points and 11 rebounds.

Love hit four of his six three-pointers on the evening during the third quarter to spark the Cavs to their first lead of the game. Afterward, Love explained how he approached the situation:

“It’s just resilience, because we came out sloppy, but we have to defend our home court,” remarked Love. “I just found my spot and my teammates got the ball to me.”

Blatt noted how important Love’s third quarter effort was to the Cavaliers as a whole:

“Kev got it going for us, got some open looks and he made some big shots when he needed to,” said Blatt.

The main culprit regarding the slow start was the cold shooting for Cleveland, which saw them miss two out of every three shots for most of the first half.

After falling behind 39-27, the Cavaliers shooting picked up, connecting for 58 percent on field goals for the rest of the second quarter. They also had a few chances to either tie the game or get within a point or two, but by halftime, Brooklyn still led 50-44.

Despite the deficit, Blatt was happy with how Cleveland stayed within striking distance:

“We kept it close enough to get regrouped during halftime,” commented Blatt. “We didn’t play great, we didn’t shoot it well, but in the second half we got the job done.”

When asked about the first half woes, Blatt spoke about the grind of the season during the first month of action:

“We’ve played 17 games in 31 days. We weren’t ready for the start of the season that was supposed to get us in shape because of the injuries,” said Blatt. “I thought we were a little heavy-legged in the first half and it showed.”

The key matchup during the opening two quarters was at center with the triumvirate of Timofey Mozgov, Thompson and Anderson Varejao combining for just four points compared to the Nets’ Brook Lopez, who garnered 16 points. Some defensive adjustments held Lopez to just six points after intermission.

Blatt was asked about what changed in defending Lopez:

“We forced him to take tougher shots, and perhaps we wore him down,” commented Blatt.

The Cavs will be off until Tuesday night when they host the Washington Wizards in a clash that’s set to tip off just after 7 p.m. at Quicken Loans Arena.