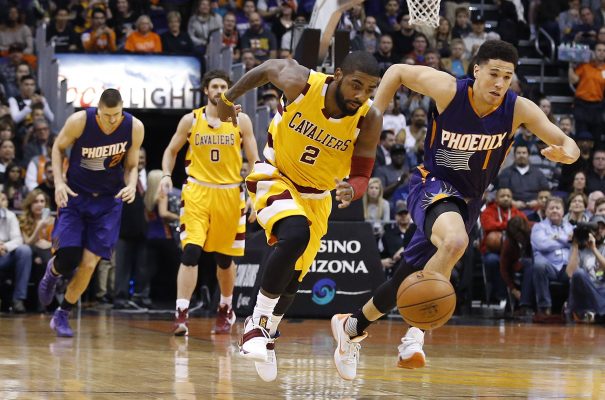 In the competition that’s developed among NBA teams when it comes to dealing for Cleveland Cavaliers point guard Kyrie Irving, the Phoenix Suns have been most frequently mentioned as a possible landing spot for the six-year All-Star. On Wednesday, a reported offer by the team was passed along by the media.

Minneapolis-based Darren Wolfson of 1500 ESPN spoke about the potential trade on his podcast:

“The Phoenix Suns are the team to watch on Kyrie Irving. Now, they won’t offer Josh Jackson plus that Miami 2018 first and Eric Bledsoe. I’m told they’ll do Bledsoe. They’ll do the pick. Plus, Dragan Bender.”

The presence of the 6-foot-1 Bledsoe in any deal appears to be a given, considering his position of point guard and LeBron James‘ support, with the two players sharing the same agent. Bledsoe, who turns 28 in December, has developed into a solid player, averaging 21.1 points and 6.3 assists last season. However, he has had injury issues during his NBA career, most recently during the 2015-16 campaign, when he was limited to just 31 games.

In the case of the 7-foot-1 Bender, the Cavaliers would be receiving a second-year player who was the fourth overall selection in the 2016 NBA Draft. He doesn’t turn 20 until November, but only saw action in 43 games last season, averaging just 3.4 points and 2.4 rebounds in 13.3 minutes per game.

The 6-foot-8 Jackson was the Suns’ first-round selection in June’s draft and, like Bender, was also the fourth overall selection. Some reports have indicated that if Bender was replaced by Jackson, the Cavaliers would quickly agree to such a deal.

The future first-round selection and Bender’s slow development thus far could cause the Cavaliers to look elsewhere when it comes to trading Irving because of their win-now mindset. The team itself doesn’t appear to be in any hurry to deal Irving, though it would prefer not having Irving arrive for the team’s training camp, considering his disdain for staying as a member of the franchise.