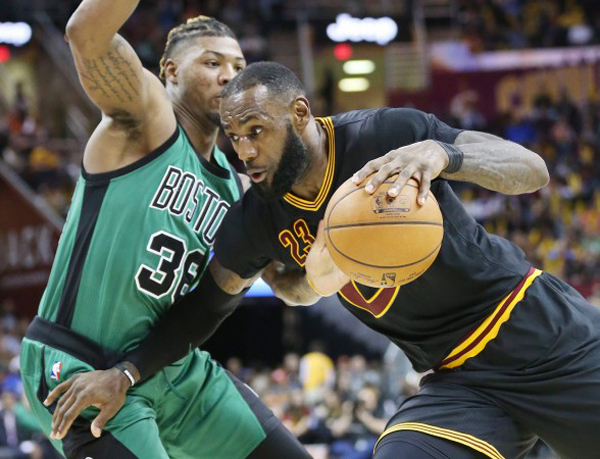 The Cavaliers had led 101-83 to start the fourth, then watched the Celtics methodically chip away at the huge deficit. The comeback began with a 17-6 run over the first six-plus minutes of the final period to make it 108-102 in favor of the Cavs with 5:47 remaining. Then, after Cleveland pushed the margin back up to eight, Boston quickly got the margin down to one on three different occasions.

After LeBron James split a pair of free throws with 21.3 seconds left to make it 120-118, the Celtics’ Jae Crowder had a chance to give his team the lead but his 3-point attempt missed. Jefferson got the rebound and converted both free throws. A subsequent miss in the closing seconds allowed Kevin Love to add the final two points of the game after he was fouled with 3.2 seconds to go.

“They took the energy away from us, but we were able to keep our composure and make some timely stops,” James said.

The near-collapse was in contrast to the strong third quarter that allowed Cleveland the opportunity to build its lead up to as many as 20 points. That scoring outburst was propelled by 10 unanswered points to start the second half.

“We messed around with the game too much, we let our guard down,” Love said. “We can’t let that happen, we have to be much better next time.”

Love, James and Kyrie Irving combined for 85 points on the night, with all three collecting double-doubles on the evening. Irving led all scorers with 32 points and handed out 12 assists, while Love contributed 30 points and 15 rebounds. James came close to another triple-double with 23 points, 11 assists and eight rebounds.

“We’ve got to carry the load a lot of the time,” Love said. “Kyrie is so great, especially in that fourth quarter, he held it down for us. ‘Bron made big plays when he needed to and that’s what he does all the time, so I just try to carry my load as much as I can.”

Jefferson and Tristan Thompson were the only other Cavaliers players to score in double figures with 11 points apiece. Thompson missed a double-double of his own by just a single rebound.

“RJ (Jefferson) has been great, especially in our last three wins,” Cleveland head coach Tyronn Lue said. “He’s been getting to the paint, getting to the line. That’s what we need.”

During the first half, the opening quarter of action was back and forth for the first nine minutes of play as Boston held a 23-19 lead. Over the remainder of the period, the Cavs ran off 13 unanswered points to take a 32-25 advantage heading into quarter number two.

Both teams were just getting warmed up as they each shot 60 percent from the field during the second quarter. Boston’s Isaiah Thomas accounted for half of his team’s 34 points during the period, while the Cavs Big 3 of James, Irving and Love led the way to a 66-59 halftime lead by combining for 43 points. Love also contributed 10 rebounds during the first half, while James and Irving each dished out seven assists among the 19 by Cleveland in the first half.

Despite nearly getting a triple-double, James wasn’t pleased with his performance on the night.

“I was horrible tonight. If there was a report card, I’d give myself an F,” James said. “My concentration, mindset and eight turnovers were part of the reason. I was just glad I was able to make some key plays down the stretch.”

Lue, though, spoke about how James and Love’s contributions aided the Cavs:

“He (James) was able to space the floor with his shooting ability. A couple of plays we ran, he was able to get layups and dunks because they were afraid to leave Kevin,” Lue said. “It was a great game for Kevin. Against this team, he can use his size and he can post a lot of the guys on the block.”

The Cavaliers will ring out 2016 on Saturday night when they travel to face the Charlotte Hornets in a game set to tip off just after 7 p.m. ET.