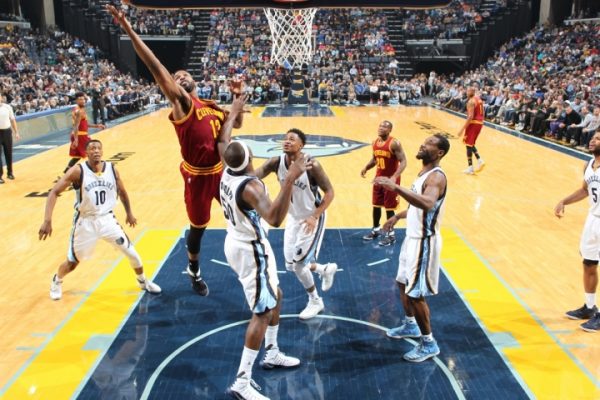 (Memphis, TN) – Being on the wrong end of a 21-5 run over the final eight minutes of the third quarter and weak shooting from the field doomed the undermanned Cleveland Cavaliers as they dropped a 93-85 decision to the Memphis Grizzlies at the FedExForum on Wednesday night.

After getting what had been a double-digit margin down to just four at 52-48 with 7:47 left in the third, the Cavaliers watched the Grizzlies put the game away with a surge. Over the course of the first three quarters, Cleveland managed to hit on just 29 percent of its outside shots.

“I thought our fight was there and we were getting defensive stops, but then they went on that run and that was it,” Cavs head coach Tyronn Lue said after the game.

The misleading final score was only the result of garbage-time play that allowed the Cavs to outscore the Grizzlies 20-8 over the final five minutes of action. Despite the loss, James Jones saw one positive:

“We came out in the third quarter, and because we have a tendency to be lethargic and end up struggling,” Jones said. “But I was happy with the way we got started.”

The shorthanded Cavaliers were without their Big 3 of LeBron James, Kyrie Irving and Kevin Love in the lineup. Lue made the decision to not only rest his players, but not even have them make the brief road trip.

“For me, it was the second night of a back-to-back, and the training staff said it would be good to have them sit,” Lue said in response to complaints about Memphis fans being denied the chance to see James in action. “Guys are sitting guys out every night, but when the Cavs do it, it’s something different.”

Lue had said following Tuesday’s game that Jones and Iman Shumpert would start in place of James and Love, but instead started Channing Frye and Mike Dunleavy.

After eight minutes of action in the first quarter, Cleveland was within three points of Memphis at 13-10. However, the Grizzlies closed the period with a 15-6 run, with the Cavaliers struggling from the field by hitting just 26 percent of their 19 attempts. In contrast, Memphis nailed 58 percent of the same number of shots.

“When those guys are hitting shots, they’re a tough team to beat, no matter who’s out there,” J.R. Smith said.

Trailing 28-16 after one period, the Cavaliers were able to cut that deficit in half to make it 35-29 in favor of the Grizzlies following a Smith layup with 5:46 left. That sparked eight unanswered points by Memphis and led to them to take a 47-36 lead into the halftime locker room.

“Everyone’s used to getting wide-open shots but its hard to do when those guys aren’t out there,” Smith said in reference to the absence of James, Irving and Love.

Cleveland’s shooting improved only slightly to 32 percent in the second quarter, and helped them stay within striking range only due to Memphis managing to match that same shooting percentage.

“I like what I saw out of Lig and Kay’s performance,” Jones said.

Cleveland will be back home to face the Los Angeles Lakers on Saturday night for a game that will tip off shortly after 7:30 p.m. ET. Prior to the game, former Cavs center Timofey Mozgov will receive his championship ring as part of last year’s title-wining squad. Mozgov agreed to a four-year free-agent deal with the Lakers less than two weeks later.