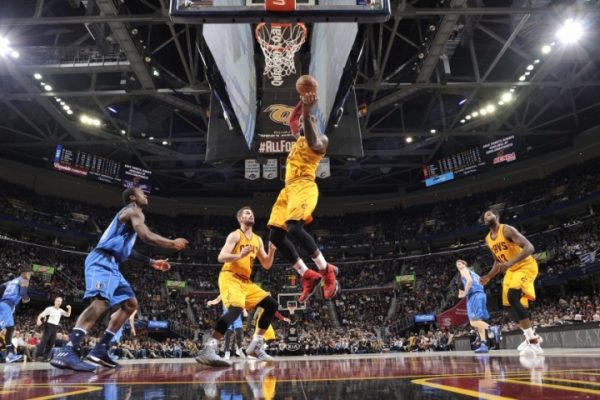 (Cleveland, OH) – Taking complete control of the game during the first half helped the Cleveland Cavaliers coast to an easy 128-90 victory over the Dallas Mavericks at Quicken Loans Arena on Friday night.

Neither team had shot particularly well to start the game, combining to miss 11 of their first 14 shots. However, by the time the half had ended Dallas was held to just 35 percent shooting, while the Cavs managed to hit at a 51 percent rate.

The Cavs roared to life in the opening quarter as Kyrie Irving did his best impression of Kevin Love’s Wednesday night performance. Irving scored 19 during the first period and outscored the Mavs in the process, connecting on all seven of his field-goal attempts, including four 3-pointers.

Cleveland had led 14-10 after six minutes of action, but kicked it into high gear with a 22-6 run for the remainder of the quarter to take a 36-16 lead. The push continued when they returned to start the second quarter, primarily due again to their prowess from beyond the 3-point line. By halftime, they already had 11 3-pointers to their credit, ending with 20 on the night.

“People are going to focus on the 3-ball, but the defense has been stepping up,” LeBron James said after the game. “When we have the effort and the communication, we’re a pretty good team defensively.”

The Cavaliers led 68-28 with just under two minutes to go in the second quarter following a 3-pointer from Love. The Mavericks ran off seven unanswered points, but by the time intermission began, Cleveland still held a commanding 72-38 lead.

The third quarter kept up the pressure, with the Cavaliers again boosting the lead back up to 40 by the end to hold a 95-55 lead. That allowed Cavaliers head coach Tyronn Lue to empty his bench and rest his starters, none of whom played 30 minutes or more.

“I just told our guys at halftime to just go out and play, don’t get sloppy,” Lue said. “We were able to do that.”

Love led all scorers with 27 points and was one of three Cavs to collect a double-double in just three quarters by grabbing 10 rebounds. Joining him was James, who scored 19 and handed out 11 assists, and Tristan Thompson, who collected 11 points and 12 rebounds.

The Cavaliers’ starting backcourt was a study in contrasts, with Irving finishing with 25 points by hitting 10-of-13 shots, including the aforementioned four 3-pointers. Meanwhile, J.R. Smith endured a brutal night, hitting just 1-of-11 from the field for three points, the lone down note of the night.

Despite Smith’s off night, James noted the team’s overall commitment to improve as one of the keys to the fast start for both the game and the season.

“The guys that came back just got better,” James said. “You have to take advantage of it.”

Cleveland was able to accomplish its 12th victory on the season without the services of reserve center Channing Frye, who is out indefinitely. Frye is again dealing with a tragedy in his immediate family following the death of his father, which came on Thanksgiving. That passing occurred just 28 days after his mother had died from cancer.

The win improves the Cavs’ season record to 12-2 and drops the struggling Mavericks to 2-13 on the year. Asked to explain what’s changed to allow the team to score 265 points in their last two games, Lue suggested the law of averages at work.

“The same shots that we’ve been getting but weren’t hitting, we’ve been making,” Lue said.

The Cavaliers will travel to Philadelphia for an afternoon game on Sunday afternoon, with tip-off scheduled for just after 1 p.m. ET.