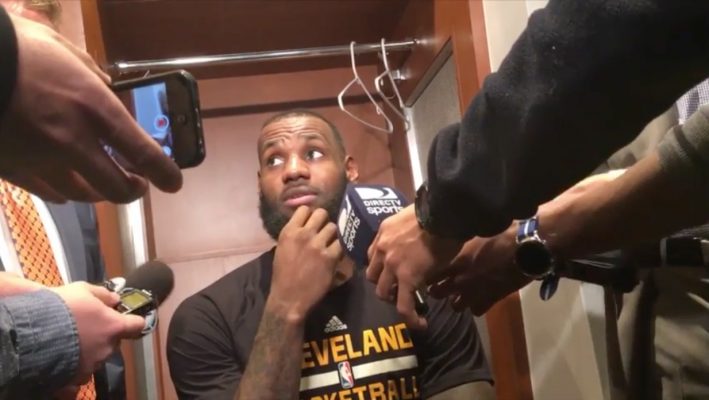 The frustration of losing five of the last seven games further loosened the tongue of Cleveland Cavaliers forward LeBron James following Monday night’s 124-122 loss to the New Orleans Pelicans. James once again sounded the alarm about the team’s continuing roster needs and the short window of opportunity available to him to win another title.

“I don’t know what we got to offer. I just know me personally? I’ll be 33 in the winter and I ain’t got time to waste. That’s what I’m talking about,” James said. “When I feel like physically and mentally, me personally, can’t compete for a championship no more or I feel like I can’t do it, then I won’t have this problem. But until that happens, and it don’t seem like no time soon…”

James pleaded for roster help from the Cavaliers’ front office, specifically citing the need for a backup point guard and additional playmakers.

In James’ mind, the current depth behind Kyrie Irving, consisting of rookie Kay Felder and DeAndre Liggins, isn’t sustainable during what James and the team hope is another long playoff run.

“No disrespect to DeAndre and to Kay, you think we can rely on them to help us win a playoff game right now?” James asked. “And it’s no disrespect to them. But it’s like, it’s not fair to them.”

James offered praise for Felder, but compared his development situation to that of former Cavalier Matthew Dellavedova.

“He’s (Felder’s) gotten better, I commend him,” James said. “It’s tough for Coach (Tyronn Lue) because we’re in the process of trying to win a f—— championship,” James said. “It would’ve been unfair to Delly to ask him his rookie year to play on a championship-level team. So that’s why you got guys in front of him that allows him to (grow). We telling Kay to be a backup point guard to a f—— superstar right now, instead of being a backup point guard to a guy that’s proven in the league. You know what I’m saying?”

James also bluntly noted that Mo Williams’ abrupt and unexpected retirement was an early setback before again reinforcing his plea for another playmaker.

“We got f—– with that,” James said. “I ain’t got no problems with the front office. I told (team general manager David Griffin) to his face, so it ain’t like I’m telling y’all to put it on record. I see Griff all the time. One thing about me, if I got something to say, I’m going to tell it to your face. We need a f—— playmaker. I’m not saying you can just go find one, like you can go outside and see trees. I didn’t say that.”

The fear of losing either Irving or James to injury for any length of time is also something that should serve as a motivating factor to do something, according to James.

“For the most part, all championship contending teams have got guys that are ready to step in,” James said. “Knock on wood, what if Ky goes down? For two weeks. Let’s say two. What if I went down for three weeks?”

Before leaving the locker room, James also offered an honest appraisal of the team’s fortunes since the start of the new year.

The Cavaliers will have a chance to improve their January performance and get back on track this week, with home games against the Sacramento Kings on Wednesday and the Brooklyn Nets on Friday.