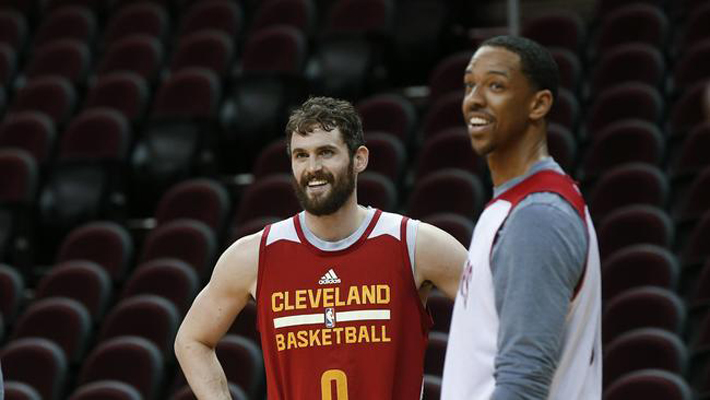 One of the key factors for any team is the level of chemistry between teammates, something that the Cleveland Cavaliers’ Channing Frye and Kevin Love apparently have, if a brief moment in Friday night’s postgame locker room is any indication.

Following the Cavaliers’ 104-81 rout of the Detroit Pistons, Frye had showered, dressed and was preparing to leave Quicken Loans Arena when he spotted something in Love’s locker. It was a limited-release bottle of a Triple IPA (India Pale Ale) specifically produced to recognize the Cavaliers’ NBA Championship, entitled “All for One.”

Dave McMenamin of ESPN then described what took place next:

“Funny scene in Cavs locker room postgame. Channing Frye takes stock of his belongings before leaving: ‘Wallet, phone, keys, good to go.’ Then he sees a special ‘One For All’ IPA in Kevin Love’s locker, a brew commemorating the Cavs’s championship. ‘I’m taking his beer,’ Frye said as he grabbed the bottle and walked out of the room. ‘He’ll never drink this anyway. Cutting carbs.’

A suburban Cleveland brewery, The Brew Kettle, produced the bottle in conjunction with the Cavs and only put it on sale this past Wednesday. They had produced just 216 bottles, a symbolic number to acknowledge Cleveland’s area code. Due to the scarcity of the 33.8 oz. bottles that have more than 12 percent alcohol and include a Cavaliers’ championship label, they’re being sold for $25. The hope is that they’ll become a collector’s item.

The product is the second ale that The Brew Kettle has offered the Cavaliers. Back in March of 2015, they put on sale a “One for All” ale, with both beers playing off the team’s slogan of “All For One, One For All.”