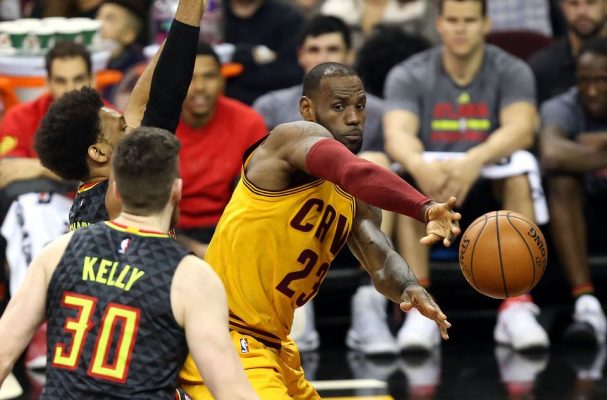 (Cleveland, OH) – The Cleveland Cavaliers followed up their most impressive performance of the season with their most embarrassing effort, falling at home to a heavily depleted Atlanta Hawks squad by a score of 114-100 in Friday night action at Quicken Loans Arena.

While the Cavaliers were again without the services of center Tristan Thompson, the Hawks sat out four key players due to injury: Paul Millsap, Dennis Schroder, Thabo Sefolosha and Kent Bazemore, with center Dwight Howard also being held out for rest. In addition, Atlanta was playing its second game in as many nights.

“Obviously a bad performance. I don’t think we respected them and we played around with the game,” Lue said. “They came, played hard and beat us.”

Despite that decided advantage, weak defense on the part of the Cavs throughout the game proved to be fatal. The most telling indication of the team’s effort came in the 39 assists collected by the Hawks, though Cleveland made only 25 percent of its three-point attempts on the night. The loss cost the Cavaliers the opportunity to reduce their magic number to a single game and dulled the shine off their win in Boston on Wednesday night.

“We were ready to play, but the effort just wasn’t there,” Kyrie Irving said. “The lack of execution on the defensive end was the most frustrating part.”

LeBron James led all scorers with 27 points on 12-of-15 from the field, adding eight rebounds and seven assists, while Kyrie Irving notched 18 points and also contributed seven assists. The only other Cavs players to score in double figures were Channing Frye with 16 points and five rebounds, and Kevin Love with a double-double on 15 points and 15 rebounds.

“As a group, our energy level was really bad. I don’t know why,” James said. “You look to get better and we were doing that, but we took a couple of steps back tonight.”

Atlanta held a 21-19 lead after one quarter, primarily because of 36 percent shooting from the field by Cleveland. Then, the Hawks put together a 19-9 run to hold a 40-28 lead with 6:38 left in the half and although the Cavaliers were able to run off nine unanswered points, they still trailed 52-50 at the half. During that sluggish first half by the Cavs, the Hawks were able to collect 18 assists on their 21 field goals and also outscore the Cavaliers bench, 30-6.

“The guys we were game planning for didn’t play, but our execution wasn’t there,” Irving said. “Trying to turn it on, you can’t do that.”

Cleveland appeared to start taking control of the game by beginning the second half with a 17-6 run to hold a 67-58 lead, but Atlanta answered back with a 25-9 surge of its own. That gave it an 83-76 lead with 1:22 left in the third, with the Cavs chopping two points off that deficit by the time the period ended.

“It was a bad effort all the way around,” Love said. “In the second half, we let our guard down,” Love said.

In that final quarter, the Cavaliers took an 87-85 lead with just over nine minutes left on a 3-pointer by Kyle Korver, but over the next eight minutes, the Hawks progressively put the game away with a 27-7 run.

“We took a lot of bad shots and couldn’t get back in transition,” Lue said. “Tonight, we needed guys to pick up the energy and they didn’t do it.”

These same two teams will meet again on Sunday afternoon, with that contest taking place in Atlanta. Tipoff is set for just after 3:30 p.m. ET.

“I’ve been around the block more than a few times,” James said. “You don’t get too high or too low during the course of a long season.”