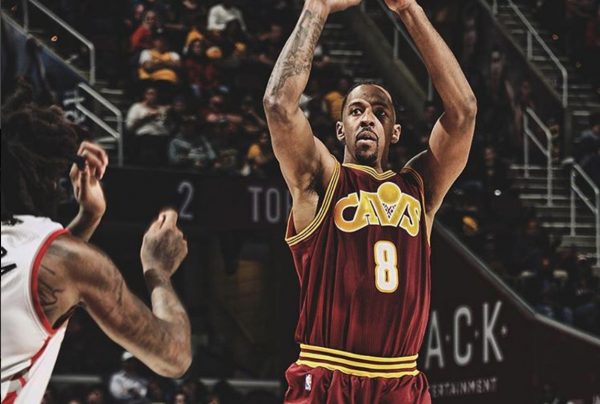 (Cleveland, OH) – Clamping down on the defensive front in the clutch helped the Cleveland Cavaliers pull off a furious fourth-quarter comeback in stopping the Toronto Raptors, 121-117, at Quicken Loans Arena on Tuesday night.

Trailing 110-103 with 4:25 to play, the Cavaliers went on a 10-2 run to take the lead with 1:57 remaining on a 3-pointer by Kyrie Irving. Toronto briefly took a pair of one-point leads until Channing Frye connected on a 3-point shot from the top of the key with 59 seconds left to give the Cavs the lead for good.

Frye’s basket provided Cleveland a 117-115 lead that was soon followed by a LeBron James layup. Each team then committed an offensive foul, followed by James splitting a pair of free throws to make it 120-115. After a basket by the Raptors with 2.8 seconds to go, Iman Shumpert split a pair of free throws to put the game on ice and boost the Cavaliers’ record to 9-1 on the year.

James had a team-high 28 points and narrowly missed yet another triple-double with 14 assists and nine rebounds. Joining James in the double-double category were Kevin Love with 19 points and 13 rebounds, followed by Tristan Thompson with 15 points and 11 boards.

“People think I’m slowing down, but I’m only going to get stronger,” James said immediately after the game.

Among Irving’s 24 points were eight during the late rally. Meanwhile, Channing Frye offered up another strong game with 21 points, 13 of them coming in the final period and five of his seven field goals being launched from long-range.

“We had to stay resilient in the fourth quarter, no matter what the rhythm of the game was,” Irving said.

Irving talked about how James’ teammates are seemingly more conscious of potential triple-doubles than James is during the course of the game.

“I don’t think it’s a main focus of his,” Irving said. “He just wants to win the game.”

The Cavs were once again without the services of J.R. Smith, who sat out the game with a sprained ankle. However, their 13 3-pointers extended their NBA record to start the season.

Prior to the late defensive effort, neither team had shown much in the way of defense, though Cleveland head coach Tyronn Lue liked the improvement in the second half when it came to giving up transition points.

“We gave up 20 points in transition during the first half,” Lue said. “I thought we did a good job of getting back and only giving up five fast-break points during the second half.”

The Raptors started out hot, connecting on five of their first six shots on the way to taking a 17-10 lead. That woke the Cavaliers up as they ran off nine unanswered points as part of a 20-6 run before closing out the quarter with a 30-25 lead.

Just past the halfway point of the second quarter, Cleveland held a 49-40 lead but watched that completely evaporate in a span of 48 seconds as Toronto hit a trio of consecutive 3-pointers to things up at 49-apiece.

After the break, the Cavs continued to stay hot from the outside but still had problems shaking Toronto. In the last five minutes, the Cavaliers went on a 13-2 run to hold a 91-79 advantage, but the Raptors chopped the margin down to seven by the end of the quarter.

“We had good rhythm for most of the third quarter,” Lue said. “But giving up those five at the end of the quarter changed the momentum of the game.”

Early in the fourth, Toronto chipped away even further by reducing their deficit to three points on a number of occasions. They made their move to take the lead with just under eight minutes to go in the game, putting together a 17-5 run that took the Cavs to the brink before the late heroics.

Despite another strong all-around night, James was simply happy to emerge with the victory.

“They keep coming at you,” James said. “This was a good win for us.”