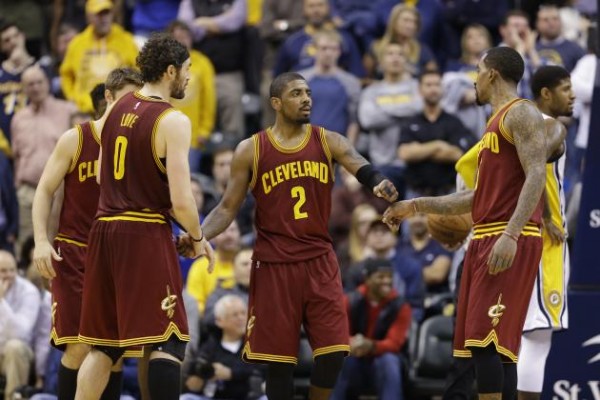 According to Chris B. Haynes of Cleveland.com, a few players in the Cleveland Cavaliers’ locker room are starting to become frustrated with their starting point guard’s lack of ball movement.

On Wednesday night, Kyrie Irving scored a game-high 33 points on 12-of-28 shooting in addition to a game-saving steal, which allowed the Cavs to squeeze by the Dallas Mavericks by a score of 99-98. However, the glaring statistic, was Irving’s meager one assist in 38 minutes.

Haynes goes on to say:

“After the game, a few players were puzzled to how their point guard managed to register just one measly assist while playing 39 minutes. They were frustrated, but the win and Irving’s huge defensive play lessened the anger.

“Players are growing tired of Irving’s inability to not only register a proper amount of assists at the lead guard position, but also to just move the ball.

“Did Irving pass more than once? Of course, but only when he was forced to do so. At one point in the second quarter, he dribbled relentlessly for 24 seconds and went nowhere. Dallas’ Chandler Parsons stayed in front of him and let him do all that fancy dribbling in one spot. Irving ended up settling for a tough mid-range jumper that clanked off the rim.

“His teammates were in disbelief.

“Lue didn’t want to rain on Irving’s parade during his postgame address. He reiterated that the plan was for Irving to stay in attack mode, but the way his point guard played attacked the morale of his team.

“Instead of worrying about how to come together to defeat the Mavericks, players were internally wrestling with knowing they weren’t going to touch the ball much, if at all. That’s not winning basketball.”

At just 23 years of age, Irving has yet to learn how to put his teammates ahead of himself. However, one thing is for sure, with just 15 games left in the season, the Cavs better figure it out quickly or they could end up watching another team hoist the Larry O’Brien Trophy come June.