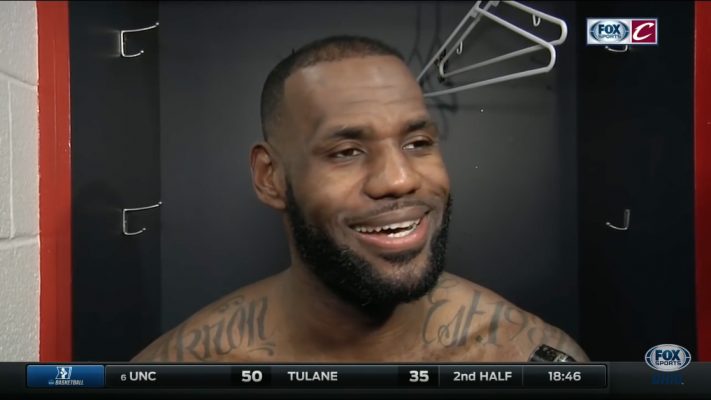 Milestones have become a way of life for Cleveland Cavaliers forward LeBron James, who entered the top 10 for in all-time scoring last Saturday. However, during Friday’s 105-94 victory over the Washington Wizards, he also eclipsed the 27,000-point mark for his career, something that his teammates took great pains to acknowledge after the game.

Jason Lloyd of the Akron Beacon Journal recounted what amounted to a surprise attack on James, who was under the impression that the team was acknowledging a milestone for head coach Tyronn Lue. James wasn’t sure what the milestone was, yet went along with his teammates when Lue addressed the team in the locker room after the game.

Lue noted that James had gone past the 27,000-point mark, which served as the trigger for his teammates to douse him with water bottles. James, already dressed for the plane flight home, ended up soaked. In addition, the suede Nike shoes he was wearing ended up soggy and his phone also took on some water damage.

Despite his situation, James was very appreciative of the recognition.

“They lied to me,” James said. “They rushed me. They got all my clothes wet and everything, but, that’s my guys so it’s always great to be able to accomplish something with such a great group of guys.”

James avoided getting completely engulfed by teammate Kevin Love, whose original plan was to use an ice tub full of water. After being unable to find one, his effort at tossing a small bit of water was stopped when James slapped his arm away.

Love was asked afterward why he was thinking so big.

“I’m the ice bucket guy,” Love said. “I don’t like the little bottles. I like to go big or go home.”

Had James been doused during the game, he might have ended up with pneumonia. That’s because everyone in the Verizon Center felt a chill in the air that evening, with James commenting on the situation after the game.

“Throughout my whole pre-workout before the game started, I was cold the whole time,” James said. “I was able to at least get my body going. But absolutely you can feel it (when it’s cold).”

The 7-1 Cavaliers return to action on Sunday afternoon with a 3:30 p.m. home contest against the 6-2 Charlotte Hornets.