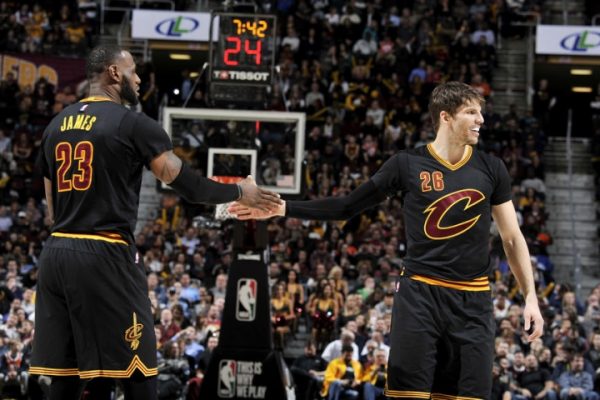 (Cleveland, OH) – The trio of LeBron James, Kyrie Irving and Kyle Korver combined for 79 points as the Cleveland Cavaliers knocked off the Indiana Pacers in a 113-104 victory at Quicken Loans Arena on Wednesday night.

“It’s something when you see guys like Ray Allen and Reggie Miller and you think, ‘Wow,'” Korver said when asked about the significance of his achievement. “To me, it’s just consistency and working on your craft and playing with some great teams.”

A scare was put into the home crowd when James went down with 6:46 left in the second quarter, wincing as he held his ankle. However, the scare was mercifully brief as he returned to the court before halftime.

“This is the way we wanted to play in February,” James said. “It sucks, though, because we’ve got some great rhythm going, but guys will be able to rest up and decompress a little.”

The final score wasn’t really indicative of how tight the game was throughout the contest. The Pacers had hit a quick three-pointer to tie the game at 83 early in the fourth quarter, but the Cavaliers answered with a 23-6 run to blow the game open. The bulk of that push came from the duo of Korver and Irving, who combined for 19 of those points, including a combined five three-pointers.

“I knew what he was all along when we played his teams,” Cavs head coach Tyronn Lue said of Korver. “We always game-planned to stop him. He’s been a great addition.”

The only other Cleveland player to score in double figures was Tristan Thompson, who notched 12 and picked up a double-double with 12 rebounds. One of the keys on defense for the Cavaliers was virtually shutting down the Pacers’ Paul George, who ended his miserable night by hitting 4-of-19 from the field.

“We’re feeling good, but we’re not satisfied,” Irving said. “We’re a veteran team, so we want to go into the break strong. Right now, everybody’s in a comfortable place.”

The Cavaliers, with the exception of James and Irving, will now be off for the All-Star break until they return to the court for a home matchup against the New York Knicks on Feb. 23. That game will be nationally televised on TNT, with tipoff scheduled for just after 8 p.m.