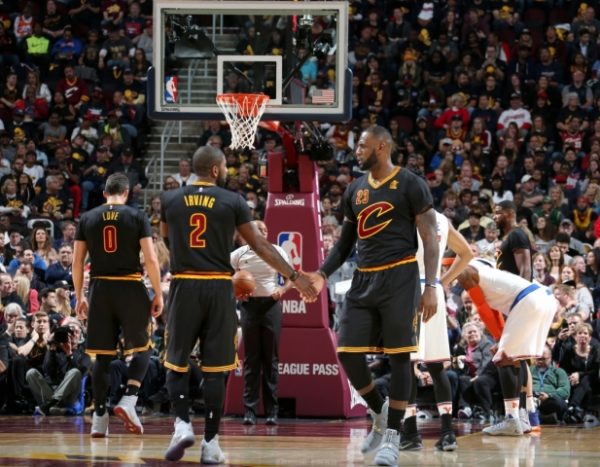 (Cleveland, OH) – A 26-8 run to start the second half by the Cleveland Cavaliers turned a tight game into a blowout as Cleveland picked up where they left off last season with a 117-88 victory over the New York Knicks at Quicken Loans Arena on Tuesday night.

The Cavaliers began the defense of their first NBA title by using the combined production of the team’s Big Three of LeBron James, Kyrie Irving and Kevin Love to score 71 points.

Irving’s third-quarter performance was the key to the game as the sixth-year point guard tallied 19 points in the quarter to blow the game open. He led all scorers with 29 points and also added four assists on the night.

In addition, James began the 2016-17 campaign with a triple-double and Love chipped in with a double-double. James did a little bit of everything by scoring 19 points, handing out 14 assists and grabbing 11 boards for the 43rd regular season triple-double of his career. Love rounded things out with 23 points and 12 rebounds.

Cleveland head coach Tyronn Lue took note of James’ performance and joked that the veteran appears to be in the same condition as he was in his rookie year.

“He was tested over the summer and he’s got the body of a 19-year-old,” Lue said. “Maybe he’s getting younger.”

Lue himself acknowledged the fans’ pre-game recognition when he was announced.

“Hearing the crowd cheer LUUUUUUE was a great feeling,” Lue said. “It was like I was back in L.A.”

Early on, both teams struggled with their outside shooting, with the Cavaliers hitting on just 19 percent of their long-range shots over the first two quarters. Still, Cleveland did show good ball movement by dishing out 14 assists on their 20 field goals.

During that opening period, the Cavs’ defense forced seven turnovers and managed to take a 28-18 lead after one quarter. Then with just under seven minutes left before halftime, the Cavaliers looked to be on the verge of taking the game over following a 3-pointer from J.R. Smith to make it 39-26.

However, in less than three minutes of action, the Knicks forged a 15-2 run to tie the game at 41. For the remainder of the second period, the margin remained tight before the Cavs took a 48-45 advantage at intermission. One of the key factors was Cleveland committing seven turnovers of their own over the course of the quarter.

Prior to the start of the game, Cavaliers owner Dan Gilbert and NBA commissioner Adam Silver handed out championship rings to players, coaches and team staff. After that was completed, the team then raised their first-ever championship banner.

“That was a great moment to be able to relive that accomplishment,” James said immediately after the game. “It’s something that will always stay with us.”

Asked about whether the motivation of defending a title is still strong, James showed no signs of letting down, with his performance a testimony to that belief.

After two days off, the Cavaliers will play their first road game of the young season when they visit their Eastern Conference Finals opponent from last year, the Toronto Raptors. Tip-off will be just after 7:00 p.m. ET.