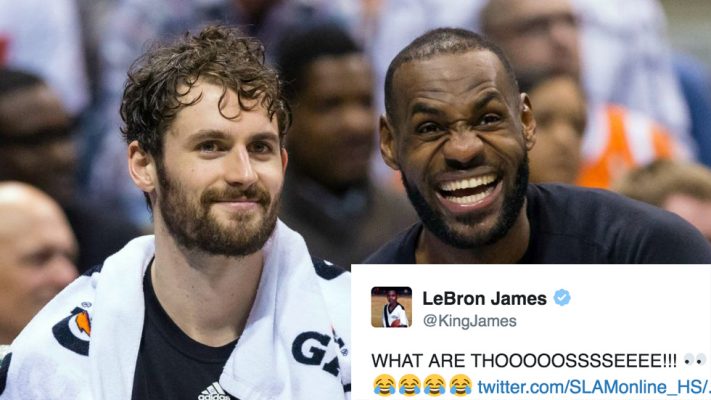 The Cleveland Cavaliers‘ championship celebration may be over, but that isn’t stopping superstar forward LeBron James from having fun.

On Tuesday afternoon, that fun came in the form of the Cavaliers star “roasting” a vintage photo of fellow teammate Kevin Love and his shoe selection via Twitter.

Love, 28, was traded to the Cavs shortly after James had returned to Cleveland but had trouble asserting himself in the early stages. As a result, his stats and production saw a significant drop-off, which led to numerous trade rumors and internal drama. Nonetheless, the power forward stuck it out and found his game in last year’s postseason to help James and the Cavs win their first-ever championship.

It’s good to see the two teammates having fun and being comfortable with each other. They’ll need that exact chemistry to defend their title this upcoming season.

cleveland cavaliersfeaturedkevin lovelebron jamesnews ticker
← Previous Story J.R. Smith Responds to Alleged Racism Towards Jeremy Lin and Asian-Americans
Next Story → LeBron James: ‘Teams Get Together in This League to Try to Beat Me’